This looks like a scene out of a very real crime television show. Or, it could be water from the lake tracked onto the dock from by an animal.
No matter what it really happens to be, the image from Google Maps has started an online uproar stating that a horrible crime just might have been committed and gone unnoticed in Almere, Holland which is right across the water from Amsterdam.
This photo shows why one would be quick to believe a murder was caught on camera. It shows what looks like a trail of blood leading to a person on the side of a dock surrounded by water. 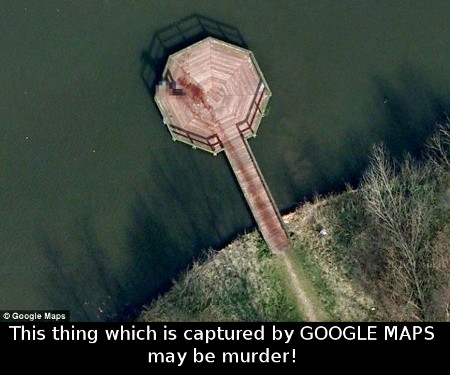 If this is a murder that was captured by Google, it happened in broad daylight and it is probably the first time this has ever happened. It’s a pretty shocking image to say the least. The picture was shared to Reddit with a caption that said “A murder near my house on Google Maps.

Isn’t it amazing what can be found on Google Earth? Also, it’s a little creepy too.