A Brooklyn man who is 32 years old, is suing his mother and father, because he says he was not shown enough love by them and because of their neglect he is homeless and doesn’t have a job.

A self-written lawsuit was filed by Bernard Bey in a Brooklyn court earlier in the month, blaming his parents for his mental anguish and making him feel like he was not loved and like he was beaten by the whole world.
He told NBC 4 New York “If you have kids, you’re expected to love your children. You want the best for your children.” 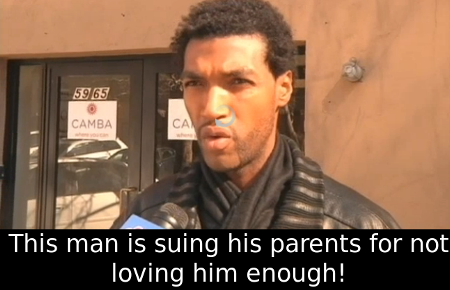 Bet said that he was emotionally and physically abused and he ran away when he was 12 years old. Then, he was in and out of shelters after he turned 16. He’s homeless now but, has spent time in jail. He thinks his parents caused these problems for him.
Bernard Bey is asking for more than $200,000 in damages, from the courts. He would like for his parents to mortgage their home and buy two franchise’s like Dominos pizza. He is an aspiring rapper and thinks the money could help the whole family.
He said “I feel like my parents should want the best for their children and grandchildren so we have something to pass down for generations so we don’t have to live like this.”
Beys mom and dad live in public housing and said they’re not able to give up any amount of money.
All Bernard Bey wants is for his family to sit at a dinner table with him and talk. Then, he will drop all of the charges against his parents.