When I go into my local McDonalds, I usually see some college graduate, student or drop out who needs a bit of extra cash at this stage in their life. Maybe a slightly older manager, and the odd 40-50 year old who’s just getting some extra cash. But never in my life has a 90 year old McDonalds worker served me! 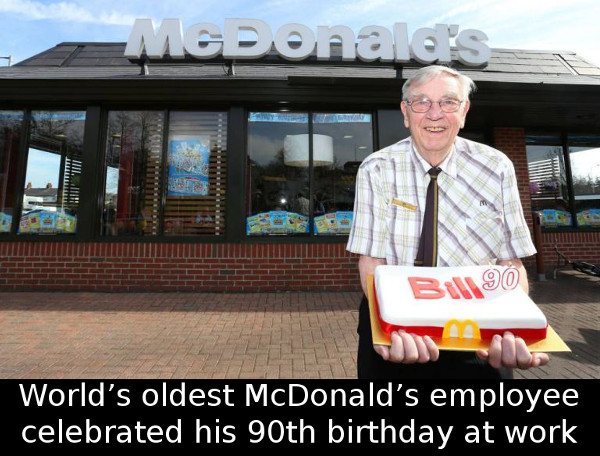 Bill, has just turned 90, and celebrated this with a McDonalds themed cake, with a kiss form two of his colleagues! He even has the nickname ‘Old McDonald’ from his wife, as it’s no secret that he’s the oldest employee at McDonalds.

Bill has been a worker in a north Wales branch, and has been for nine years. It seems he loves his job so much, that he plans to continue for it for as long as his health will allow.

It helps me stay young and I just keep going.

It was after his wife got sick of him being at home all the time, that this veteran from the Second World War got the part time job in the branch. He even said that he got bored as his wife wouldn’t allow him to help her gardening! This meant a job here was the ideal solution!

He’s no stranger to work though, and has been working since he was only 12. Some would say that he deserves a rest now, but he just keeps loving it.


‘Bill is an incredibly valued member of the team and our regular customers and crew members alike are all incredibly fond of him.

I definitely wouldn’t mind having a McDonalds themed birthday! Let alone that he is clearly valued by all his colleagues!