It was the 25th of June in 2007 when the cops came into Chris Benoit’s house. They entered because of a “welfare check”. This was because he did not show up for quite a few scheduled appointments and they were worried about Benoit. Upon entering at about 2:30 pm, the bodies of Chris Benoit, Nancy, his wife, and Daniel, the couples son who was only 7 years old. Later the police came to the conclusion that the murders were committed by Benoit himself. The killing spree went on for three horrific days. The son and wife of Benoit were murdered and after Benoit hanged himself. Before his wife was killed, she was tied up and his son was probably unconscious because of being drugged, before his father strangled him. After he killed his two family members he used a weight bench to commit suicide. 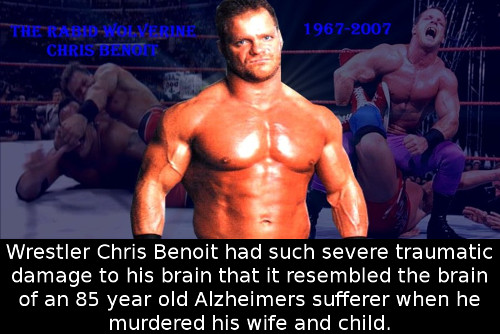 On June 25th, after the deaths were revealed, WWE took their once planned live Raw show, which was three hours long, off of the lineup and it as replaced. The shows replacement was a tribute to Benoits life and also his career. The video showed matches from his past, clips from his DVD Hard Knocks: The Chris Benoit Story, and statements from announcers and wrestlers who knew him. But, just after the horrifying detail of the murder-suicide came about, WWE started to distance itself from Benoit without much noise about the situation. They took all of his merchandise out of stores and never said his name again. The next day, ECW started by Vince McMahon speaking to the audience about hat happened and said that they would never mention Chris Benoit during that Fridays Smackdown show.

The toxicology reports were released on July 17, 2007. They showed that during the time they were killed, Benoit’s wife Nancy had a total of three drugs in her body. They were: Xanax, hydrocodone and hydromorphone. All of these drugs were found at a level that is considered therapeutic and not toxic levels. The son, Daniel, had Xanax in his system as well. The Chief Medical Examiner believed that Daniel was put to sleep before his father strangled him to death. Benoits toxicology report came back stating that he had Xanax, hydrocodone, and a very high level of testosterone. The high testosterone levels were due to a synthetic type of that testosterone in his system. It is believed that Benoit was being treated for a deficiency, that was caused by abusing steroids or insufficiency of the testicles. Nothing in his body pointed to causing violent behavior. There was no, what they call, “roid rage” involved whatsoever. Before murdering his wife, child and killing himself, Chris Benoit was taking steroid that were deemed illegal. The steroids were not allowed by WWE’s Talent Wellness Program. Nandrolone and anastrozole were the steroids he was given. Upon further investigation, many other wrestlers were taking steroids as well.

Not too long after the terrible situation caused by Benoit, a former wrestler, Christopher Nowinski got in touch with Christ Benoits father and said that the years and years of trauma to Benoits brain could have possibly led to the events that occured on June 25th. Benoits brain then had tests done on it by the head of neurosurgery at West Virginia University, Julian Bailes. The results were shocking. His brain was damaged so badly that it looked like an 85-year-old patients brain with Alzheimers. He reportedly had a form of dementia that was in an advanced stage which looked like the brains of four NFL players who all retired and suffered may concussions, fell into depression and hurt themselves and other. Bailes and colleagues of his decided that many concussions can cause dementia and that can add to many behavioral problems. Chris Benoits dad says that the brain damage very well could have caused him to commit the crime. It was also confirmed by his son that Benoit was cremated quietly, but nobody knows what was done with the ashes of Chris Benoit.