Die-hard fans of The Vampire Diaries from all around the world are being left with broken hearts, because Michael Trevino and Nina Dobrev have decided to leave the show for good.

The Vampire Diaries kicked off on CW back in the not so distant 2009 and swiftly started gaining fans globally. The show became a bigger hit than the books it was originally based on and by far, it’s one of the top 5 most successful shows for the CW. It’s currently running its 6th season, but the producers have booked a seventh one as well. However, by the looks of it, the show’s main star won’t be starring in it anymore. 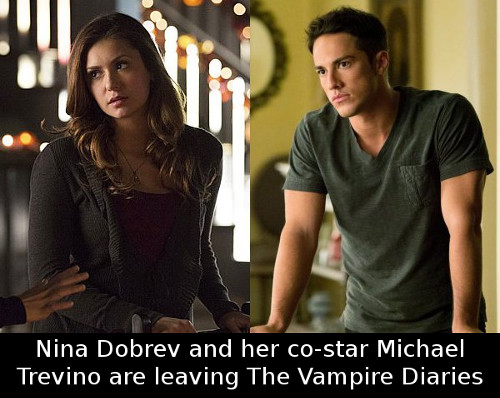 Even though the creators of the show claim that they didn’t know it was going to become so popular and stay on top for so many years, Dobrev claims she had always known that Elena’s story had to be told in 6 seasons. The 26 year old actress has played a hundred roles on the show as was both the most innocent heroine and the most mischievous villain. However, Elena and Katherine’s days are numbered. Dobrev is final on her decision, although the creators of The Vampire Diaries are positive that they will continue with the show even without Dobrev and Trevino. Furthermore, they are planning to expand it to more than 7 seasons, because they feel like they can focus more on the Salvatore brothers’ story and keep coming up with new twists and turns to keep the fans on edge.

Dobrev says that she’s excited to be able to take a break, to travel the world and to think about upcoming projects. Michael Trevino, on the other hand, has already landed a new role in ABC’s new show Kingmakers – a spinoff of the popular Revenge series.