Not so long ago Steve Jobs decided to drop the very first iPod into an aquarium filled with water on purpose just so he could prove his point to the rest of the Apple staff.

Back when Apple designed their very first iPod the founder of the global tech giant decided to drop the device’s first prototype into an aquarium, which was filled with water, on purpose. He was trying to prove his point and teach the staff a lesson by going to extreme levels. 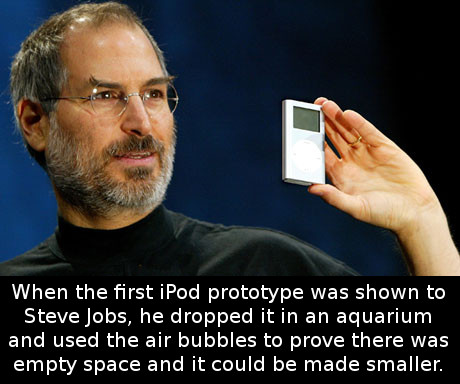 One of Jobs’ many former employees, who used to work at Apple, recently shared a fun story about him with the media. Amit Chaudhary, the ex-employee in question, reminisced how his former employer decided to drown the very first prototype of Apple’s iPod. After a team of designers and engineers had spent countless hours sweating over the product, they finally presented Steve Jobs with the very first prototype of the planned iPod. The company’s founder took it and started examining it. After a thorough scrutinizing and weighting Jobs finally declared that it was not good. In fact, it was so bad that he decided it shouldn’t surface outside of Apple’s premises at all! He thought that the prototype was too big. However, the staff thought otherwise. In fact, they even stated that they would have to “reinvent inventing”, because it was physically impossible to make the product any smaller than it already was.
Jobs didn’t respond at first and came up with an extreme solution to the problem – to destroy the prototype in order to prove his point. Thus, he dropped the device in a water filled aquarium on purpose and let it sink to the bottom of the container. He showed his staff that the bubbles coming out of the sunken device were because there was too much air in it, which meant that it was in fact indeed possible for the engineers to design a smaller iPod.
And so they did.