A lot of us will use Facebook and be bombarded with annoying notifications about a comment on this post, to keep up with your friends, and to see some awesome articles (like this one!) It’s also used as a social gaming platform, and also by companies as networking and advertising. 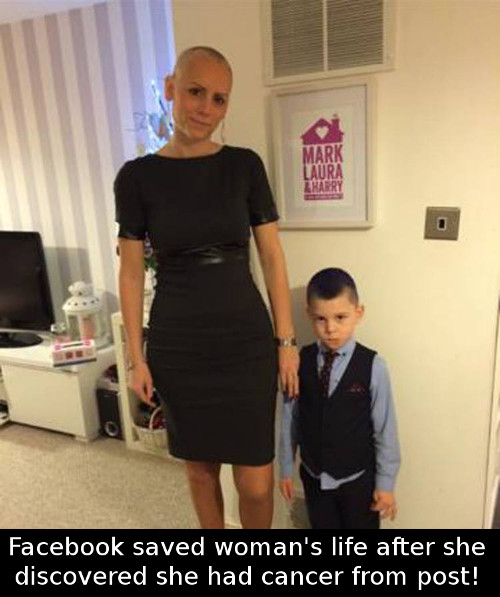 Laura Everley, who is 36 years old, has managed to use Facebook for something which is certainly more useful than all of those things – to save her life. She hadn’t realised that she had cancer until she was looking at her timeline, and came across a post which detailed the symptoms the disease.

Laura, a mother of one, said that the post was shared by a friend of hers about her own experiences with cancer, including a list of symptoms, which Laura was able to use to diagnose it for herself.

There was a list of symptoms and I realised I had them all.

After seeing this post in October 2014, she went into East Surrey hospital, where doctors could confirm that she had cell carcinoma (a form of ovarian cancer). When she discussed with some surgeons soon after, they gave her the horrible decision of having one ovary removed, or to have a hysterectomy, meaning she would not be able to have any more children.

I already had Harry, but I would have liked to have had more children.

In the end, she decided that she would have the hysterectomy, as this would give a greater chance of her not having the cancer come back.

These are the symptoms of ovarian cancer:

Left with almost no hair, she has almost completed chemotherapy, and the confident doctors revealed that she could be cured of the stage 1c cancer she had.