With the release of the latest in the Fast & Furious film series, news of the death of Paul Walker, who died in a car crash with a friend, has hit the headlines again. A music video has been recently released by Wiz Khalifa for the Fast & Furious 7 tract ‘See You Again’, which shows a moving tribute to Paul Walker. 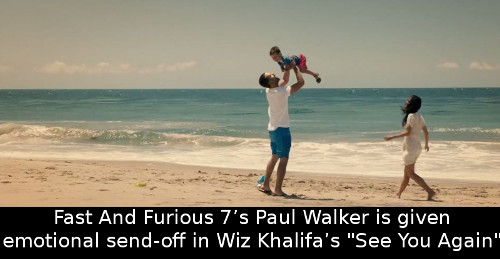 The track, ‘See You Again’ was produced with Charlie Puth, and is extremely emotional, with the video being the same. It shows Paul Walker, as his character Brian O’Conner at different points throughout the 7 film movie franchise, ending with the final scenes from this character.

It’s been a long day without you my friend, and I’ll tell you all about it when I see you again

Mike Knobloch, from Universal, said that it was important that the ending scene needed to be balanced, and as part of this, the music was a vital part.

To have a song that’s earnest and sincere and could underscore a celebration of Paul’s life. To be an anthem for that. We worked really hard to dial that in.

It was part way through the filming of the 7th in the movie franchise, in November 2013 that Paul Walker had the fatal car crash, and it was in the middle of filming for the film. At the time, the film had to be rewritten, and Cody and Caleb, Walker’s brothers, were brought in to act on their brother’s behalf.