A hilarious fail occurred during the final of the 2010 edition of Australia’s Next Top Model when the host mixed up the contestants’ names and announced a wrong winner.

We all make mistakes. Some are have more serious consequences than others. This particular woman made a gigantic mistake during a popular beauty contest and it was absolutely hilarious! 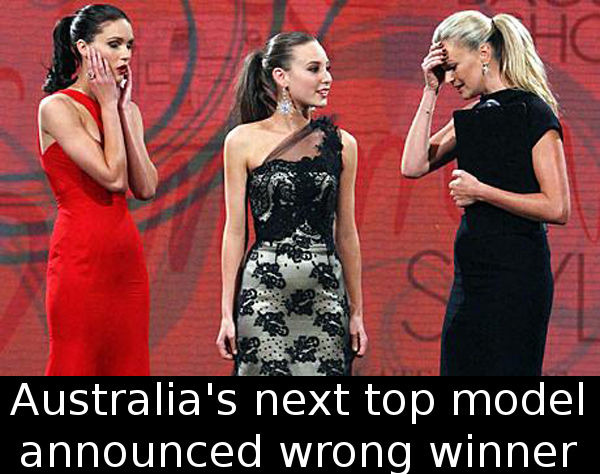 Back in 2010 during the live finale of the popular contest Sarah Murdoch, who was the host, made a huge mix up and almost cried on live TV when she announced the wrong winner. Just moments before saying out loud that finalist Kelsey Martinovich was the winner of Australia’s Next Top Model Sarah’s earpiece went off and she didn’t get the clear results from the voting. Thus, she proudly announced that Kelsey was the winner of a $20,000 cash prize, a high-end modeling contract, a $25,000 advert campaign, a gorgeous brand new car, and a cover photoshoot for a prestigious magazine. Kelsey hugged her runner-up Amanda Ware and started presenting her winning speech. While Kelsey was thanking everyone and expressing her gratitude and happiness, Sarah started stuttering and whimpering. She was kind of speechless for quite some time, just muttering how sorry she was and how unbelievable the situation was, before she actually told the whole world what a huge mistake she had made.

As it turned out, the results she received on her earpiece weren’t the final results of the voting poll and Kelsey was not the winner. The host started apologizing and wailing over her mistake and then she finally announced that Amanda Ware was the actual winner of the contest. Amanda wasn’t able to give a speech, because Kelsey and Sarah were too preoccupied discussing the mix-up. Fortunately, she was still able to do her winning cat walk and to receive the prizes as well as the title Australia’s Top Model for 2010.