If you are one of those who are absolutely obsessed with Beyoncé, then you can sign up to become a member of the fan club, ‘Beyhive’. Being a member of this shows your absolute passion for her, and Allie Davis, a 21 year old is one of those members. She is such a fan, her twitter username is @Fergyonce, and she mostly posts about Beyoncé, and sometimes about Rihanna and Harry Styles as well. 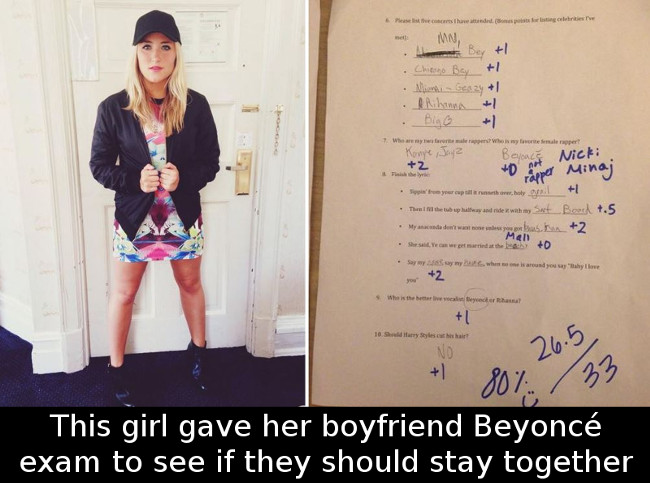 I met Beyoncé at Topshop and life will never be the same.

Usually, if in a relationship, we may respect who our other half’s fans are or are not, but this is not the case for Allie Davis. She gave her boyfriend the ‘Official Allie Davis Relationship Test’, whereby he needed to score over 60 per cent in order for them to stay in their relationship. Mostly about Beyoncé, there were also a few others questions on other pop stars, which she added just to make sure she was making the right decision. 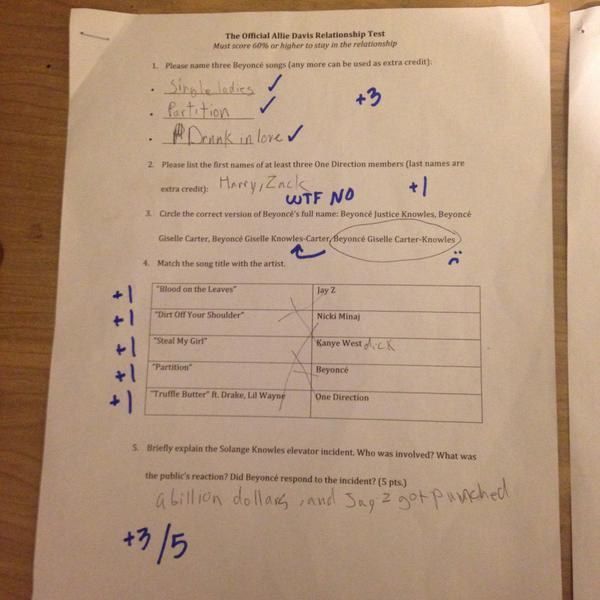 Luckily (or unluckily, depending on how you look at it), her boyfriend did pass.

After the test, she posted this on here Twitter:


I gave my boyfriend a Beyoncé exam to make sure we can stay together. He passed.

Among the questions were, he had to name three of Beyonce’s songs, which he answered with three correct answers, but on the question of naming at least three members of One Direction, he only managed to score one, with perhaps the most obvious. He even earned a “WTF NO.” for putting an incorrect name.

You may think that some of the questions are unfair though, with one of them being “Should Harry Styles cut his hair?” Although for most of us this may be a 50/50 guess, I can confirm that the correct answer is “No.”

Luckily for him, he did manage to get 26.5 out of 33 which earned him 80 per cent overall, securing his place as boyfriend of Allie Davis.

If you aren’t sure whether you should be going out with your boyfriend, then Davis has also posted blank copies of the exam on Twitter – guys, quick, check them out so you can be sure to pass before your girlfriend gives it to you!