If anyone’s been in a car crash then you know what it’s like. But for a lot of us who haven’t been, we can only imagine the experience. However, there’s something which would probably make me a little happier, which would be my girlfriend visiting me in hospital. Although, if all 17 of them came, I’d be a bit annoyed. 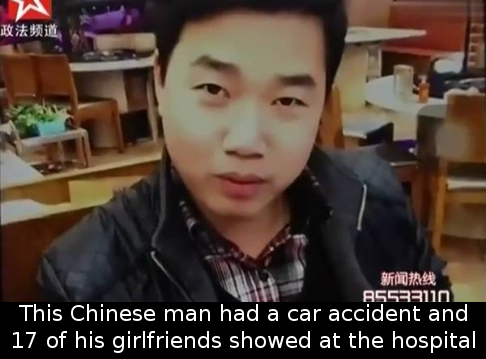 Well, this happened to a Chinese man, Mr Yuan, after he was stuck in hospital after a car accident. It’s alleged that he had been dating 17 women at the same time, and none of them knew about it. Perhaps even worse, with one of them, with one of his girlfriends, he has a child.

On March the 24th, he got some injuries which weren’t life threatening, but needed him to be taken to hospital. It was then the doctor’s job to contact all of his relatives, which it turned out to be 17 girlfriends. The doctor was fairly surprised when they all turned up, but it must have been a much worse experience for Mr Yuan.

They too did not know of each other, and one had been with him for over a year and a half.

“I was really worried when I heard that he was in hospital. But when I started seeing more and more beautiful girls show up, I couldn’t cry any more.”

However, that’s not all. After setting up a chat which they have all joined to discuss this, one of the women had been financially supportive to him, for nine years.


Whilst one girl is already married to him, another thought he was the perfect one, and had been planning the wedding.

Some may say that how he kept 17 different women under the wraps is unbelievable, and he should be commended for that. The police don’t think so though, as they launch an investigation into him for fraud. Now, that’s all worse than the car crash I think!