“You Belong With Me” 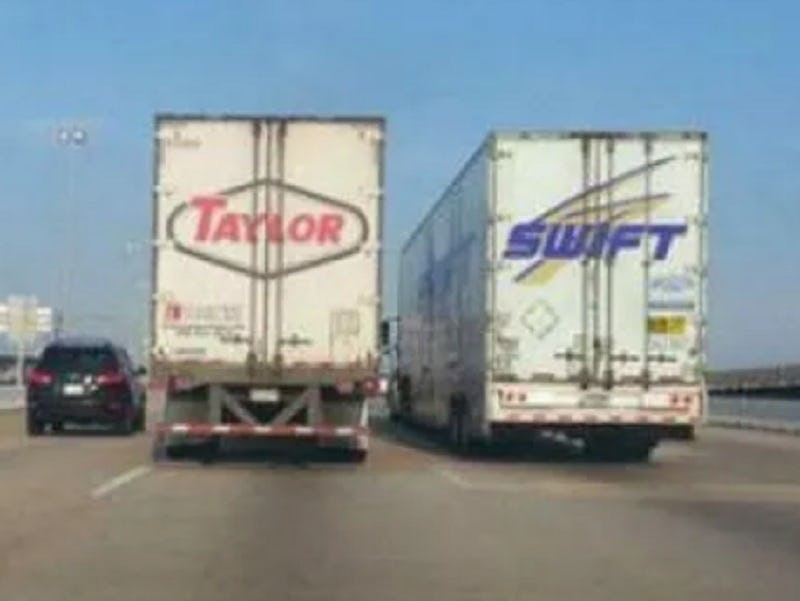 We always loved the music video for Taylor Swift’s “You Belong With Me,” but this image might be a better fit for the award-winning pop song. We don’t know if the man behind the wheel of this Taylor Machine Works, Inc. truck even realized that he was driving alongside a Swift Transportation truck, but this is still a better love story than Twilight. The two trucks hilariously spell out “Taylor Swift” and, while we don’t typically approve of people using their phones while driving, we applaud the person who took this camera phone picture for seeing a perfect opportunity and jumping on it. Coincidences like this typically never happen twice, so it’s safe to say these two trucks are “never, ever, ever getting back together.” 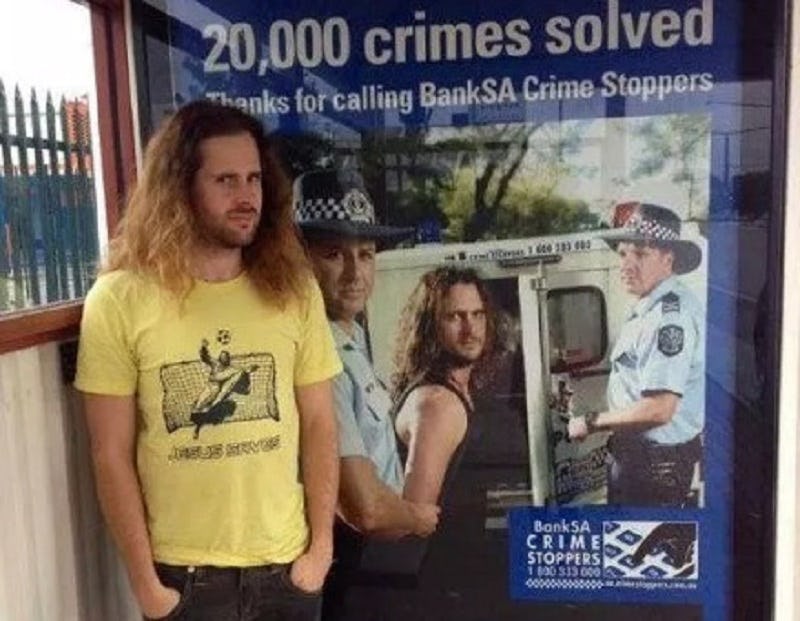 Guys these days seem to love growing out their hair and beards, so there are countless individuals out there who share a similar look. The resemblance between these two, however, is just uncanny! This shaggy-haired dude was innocently standing by a sign at his local bus stop when an eagle-eyed photographer realized that he looks almost exactly like the criminal in the Crime Stoppers advertisement he was leaning against. BankSA claims that people have helped them solve over 20,000 crimes, but it seems like the crime the man in the ad was arrested for wasn’t solved after all. Okay, we’re just messing around and understand that he’s not actually the guy in the picture (and know that even if he is, he was likely just modeling for BankSA and isn’t a real criminal), but we wouldn’t be surprised if someone in his town saw this ad and called the cops on him. 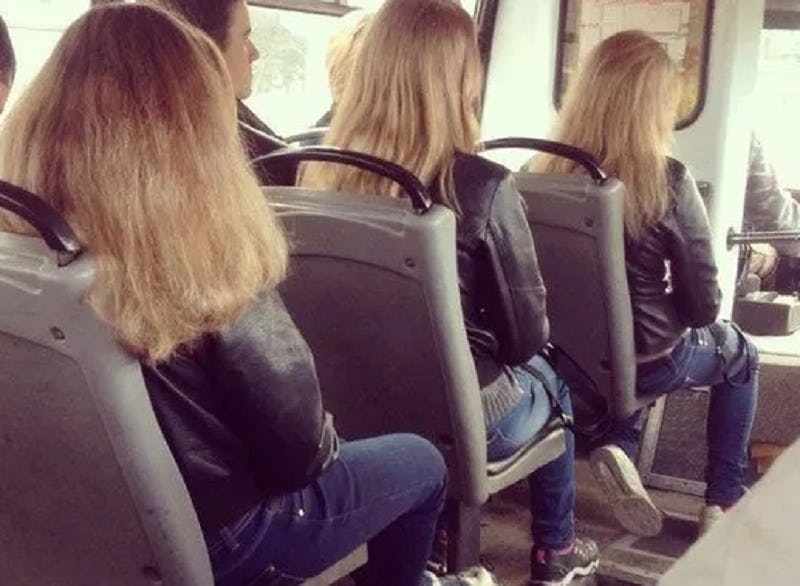 There’s nothing worse than going to school and seeing someone wearing the exact same outfit that you chose to wear that day. Sure, most high schoolers shop at the same stores so it’s unsurprising to see someone wearing one article of clothing that matches one of yours, but with all the possible combinations we have in our wardrobes, the odds of someone wearing the exact same outfit should be pretty improbable. Well, the girls on this bus seemingly defied the odds because they all wore the exact same coat, the same jeans and even donned the same hairstyle (and hair color) on their ride home from school! Someone noticed this hilarious coincidence and took a picture to prove that there’s either a glitch in the Matrix or he must be living in a town from the Twilight Zone.

Should have picked a different restaurant 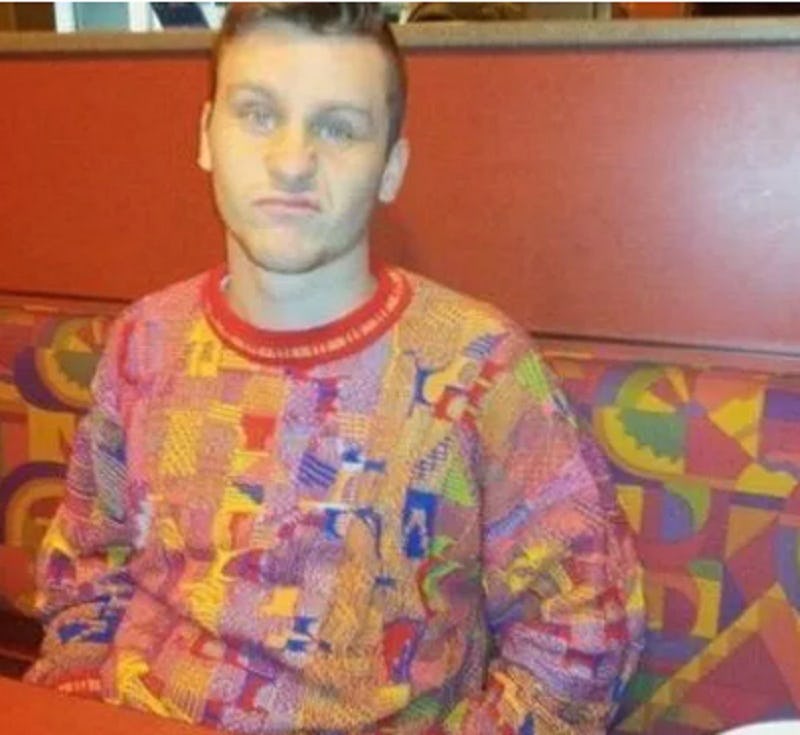 Over the past few years, attractive male college students have filled their closets with ugly clothes to seemingly bring more attention to how good-looking they are in comparison. The trend, commonly referred to as “peacocking” (because you’re dressing for attention just like how peacocks use their feathers to attract mates), has led to the rise of rompers for men and hideous sweaters like the one this dude chose to wear on a date at a local restaurant. He never would have guessed, however, that his sweater would perfectly match the tacky seats in the establishment. Instead of standing out, he now perfectly blends in with his hideous surroundings, and you can tell from the look on his face that he’s not too happy about the coincidence.

Things work out in the end 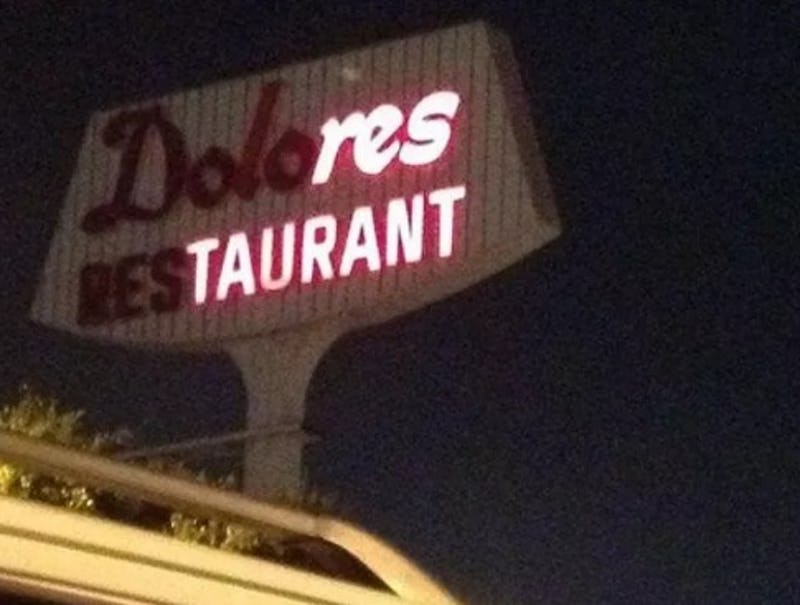 Small businesses often struggle to compete with larger corporate chains, which is likely why Dolores Restaurant can’t afford to fix all of the lights in their street sign. One by one, the lights slowly flickered out and died, but thanks to a little bit of faith and a whole lot of luck, things worked out in the end. The bulbs inside of the first four letters of “Dolores” and the first three letters of “Restaurant” went out first, so for a while, the sign still miraculously spelled out “restaurant.” It’s probably not quite what Dolores might have wanted when she spent the cash to build this, but at least the dysfunctional sign still mostly served its function, despite seven letters being entirely burnt out. The coincidence may have even boosted business. 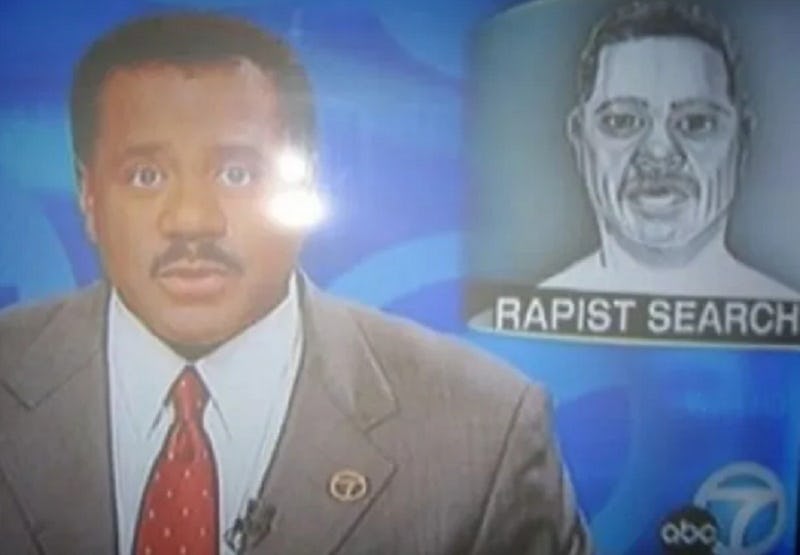 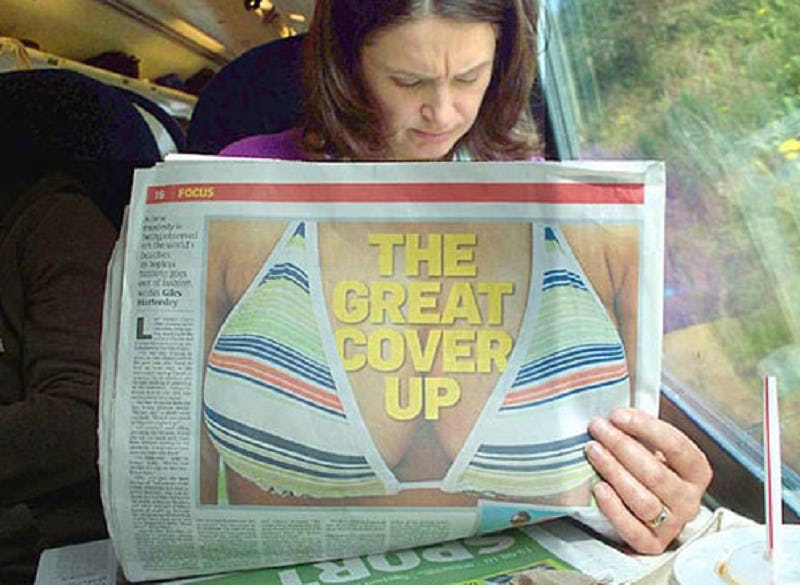 We’re pretty sure the newspaper that published this “Great Cover Up’ story on the back cover of one of their issues was secretly hoping someone would capture a hilarious picture like this one and make it go viral online for some free publicity. An unsuspecting woman had no idea what image was largely displayed on the back of her paper as she read it during a long train ride, and one of the strangers in her compartment couldn’t help but notice that the way she was holding the paper make it look like the breasts displayed on the cover belonged to her. It’s not typically okay to take pictures of people without asking first, but the photographer just couldn’t help himself. Let’s be real—you can’t really blame him… this was hilarious!