Senior pranks are a tradition in high schools across America. More so than graduation itself, the senior prank provides closure to 12th graders by providing them with an avenue to vandalize the place that freely gave them education for 4 years before moving on to college, which costs a disgusting and seemingly limitless amount of money.

But while most senior pranks involve toilet paper rolls and washable paint, Sequoyah High School seniors in Madisonville, Tennessee, decided take it to another level, adding trash, hay, dead animals, and human urine to the mix. This was more than a prank — these kids straight-up bullied their own school.

Amongst the trash, hay, ketchup, baby oil, and live crickets, the 100 Sequoyah seniors involved in the prank also brought a dead possum into the building.

Was the school store all out of live possums?

To celebrate the chaos they inflicted upon the school, several students then proceeded to urinate on everything, adding insult to injury. 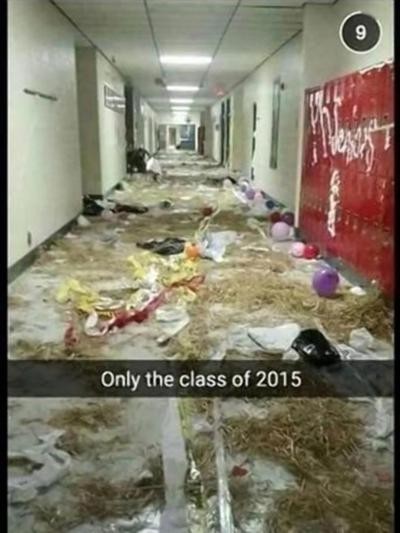 Did these kids hate the school, or just the janitors?

All 100 of the students involved in the prank have been banned from their graduation ceremony. In a strange turn of events, principal Gary Cole and officer James Fischer were suspended from their positions, since they were seen aiding the students with the prank, opening doors and carrying things for them.

Why the principal would open the doors to let students trash his school is beyond me. I’m all for having a “cool” principal, but there is definitely a line, and that line is made of dead possums and urine.