At a young age, Caleb Howard of Huntsville, Utah, was involved in a terrible head-on collision. This unfortunate incident resulted in several broken bones and, worst of all, a traumatic brain injury that left Caleb in critical condition. Doctors said his chances for recovery were low, and his father and grandmother had little to hope for. Caleb was unresponsive, and things weren’t looking good.
The impact of the collision meant that millions of Caleb’s brain cells were destroyed, rendering him unable to move. 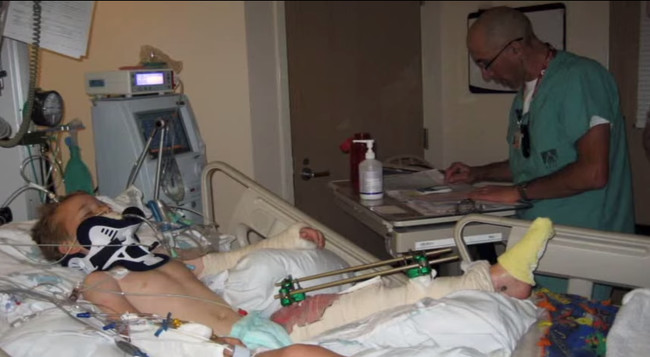 As part of his therapy, Caleb was introduced to Colonel, a specially trained Golden Retriever. Prior to this, he’d been unresponsive and lacking in energy. Seeing the dog, who was about the size of Caleb himself, perked Caleb right up. There was a noticeable change in his motivation and awareness, and he began to steadily improve.
When Colonel was brought in, Caleb’s attention and alertness were immediately sparked, and his progress improved dramatically. 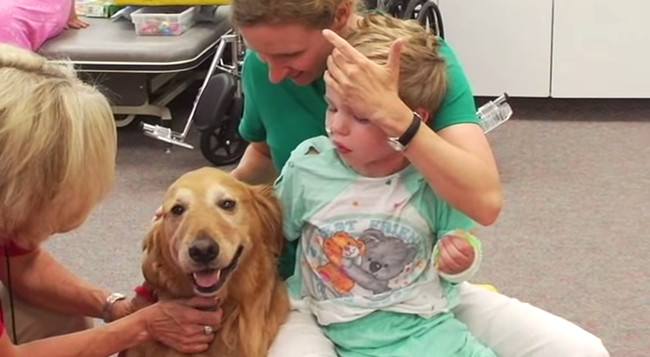 With the help of a therapist, Caleb works on his motor skills, throwing a ball for Colonel. 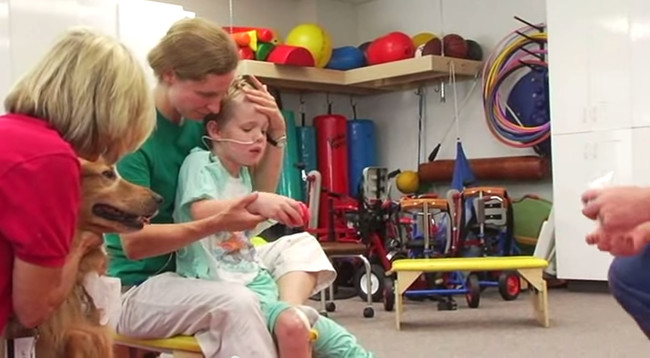 Even though he’s young, occupational therapist Lisa Barnes says that kids like Caleb who have suffered these devastating injuries often get depressed and lack motivation to try and regain mobility. Colonel helps with that problem, as Caleb finds plenty of motivation to try and play with the patient, friendly dog. His grandmother agrees. “I noticed that every time he would see Colonel, he was more alert,” she says “There was a little step in his awareness and [Caleb]…would do a little bit more than what he’d already been doing.”
Watch Caleb’s incredible story below.

After a month of intense therapy and with the help of Colonel, Caleb had become much more aware and alert, and his motor skills were vastly improved. He’s also grateful for Colonel’s companionship. “I guess he likes me a lot!” he says with a smile.

Caleb still has a way to go, but his father says that animal therapy continues to be an amazing form of healing for people, especially children.