Tattoos are more popular than ever. It seems that nearly everyone has at least one.

Most choose something meaningful to them, such as a tribute to a loved one or a cherished hobby or moment from their life.

Others might get ink to show their religious faith or dedication to their favorite band or movie.

Then, there are those that just like tattoos and pick things just because they’re pretty or badass depending on what they are looking for.

Tattoos have been around since near the beginning of time. Exactly where are when they started is impossible to pinpoint. In the beginning they seemed to be used as symbols of bravery for warriors or simply as ornamentation for beautiful women. Tribes in ancient Japan, Polynesia, and the Philippines are just a few that show evidence of tattooing from long ago.

In more recent history, getting inked has carried a stigma. There was a time that most looked at them as a negative. Until recently, many associated tattoos with criminal activities and drug use. They were regarded as being trashy and classless.

They are becoming more mainstream and accepted these days, although those with face tats still might be looked over for jobs.

Tattoos are even becoming more more modern, and changing with the times. There is glow-in-the-dark ink, now. I don’t know how I feel about that!

Being that tattoos are permanent, it is really important to make sure the tattoo you get is one you will be fine with for the rest of your life. That’s why something meaningful is always a good idea. You should also think about it for a while, don’t get a tattoo on an impulse. And it goes without saying that you should only get ink from a professional artist.

We all know that people don’t follow this advice, though. That’s how this list came to be. These are some people who surely must regret their tattoo choices, because they’re awful. Simply horrible. The worst of the worst. 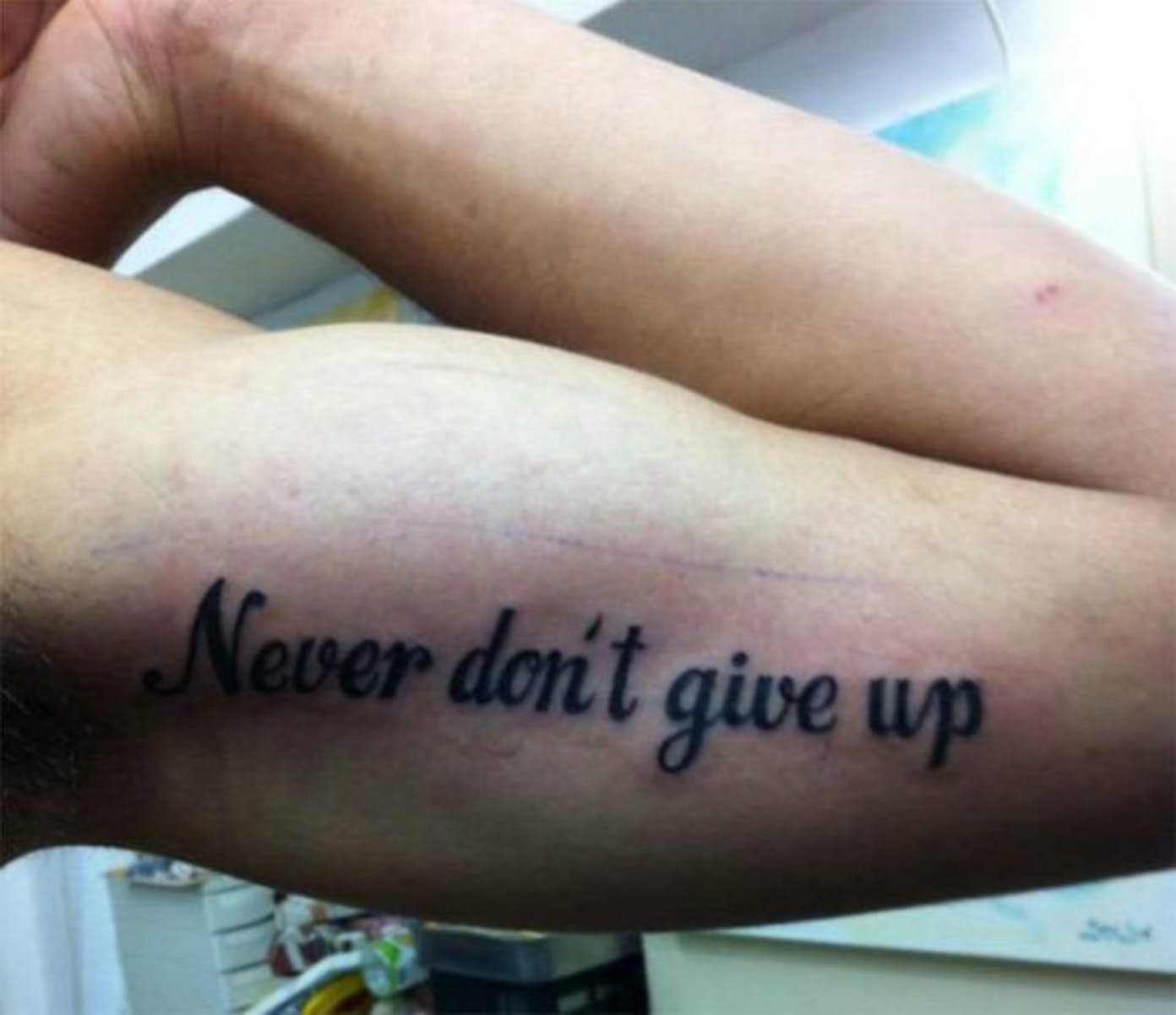 The sentiment ‘never give up’ is a good one. I tell my kids not to give up all the time. And I can see why someone would want that as a tattoo. Something to remind them that even when life gets hard, keep on going and don’t quit.

‘Don’t quit’ is also a great sentiment. For all the same reasons.

Sticking to just one or the other is probably the best idea, so as not the muddle the meaning.

Surely, the patron of this tattoo shop didn’t actually want ‘Never don’t give up’ on their body. How embarrassing, right? 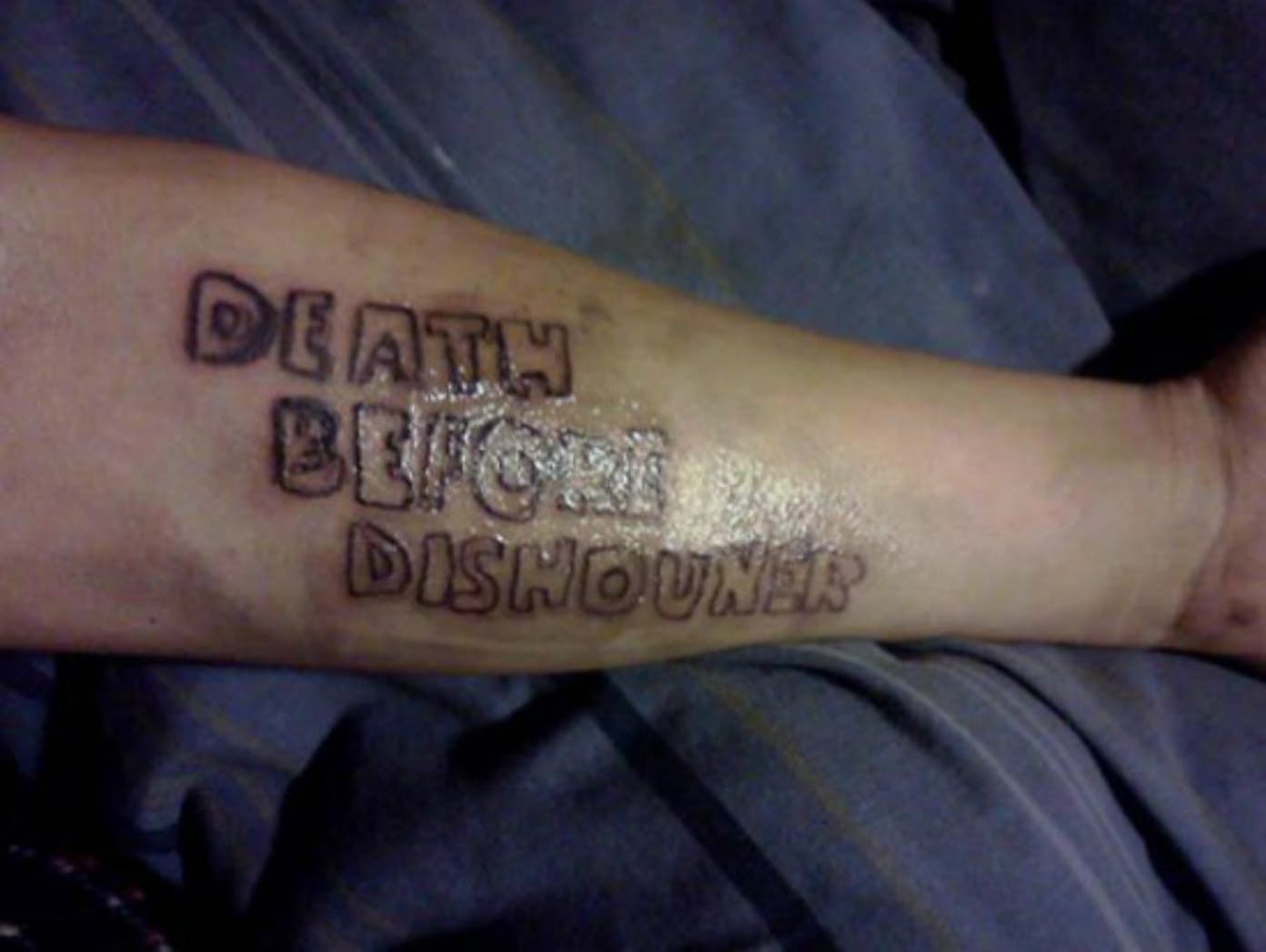 Death before dishonor is a Marine Corps saying that is pretty self explanatory.

It can apply to anybody, and is a great tattoo idea. If it’s spelled correctly. And looks like it was done by a professional artist and not a 6 year old just learning how to draw block letters.

I mean, this one is bad. Dishouner? What in the world? The lettering is juvenile and has mistakes as well. Yikes. It’s really horrible and I hope the recipient is saving up to get it removed or covered up ASAP.

No word for this fail. 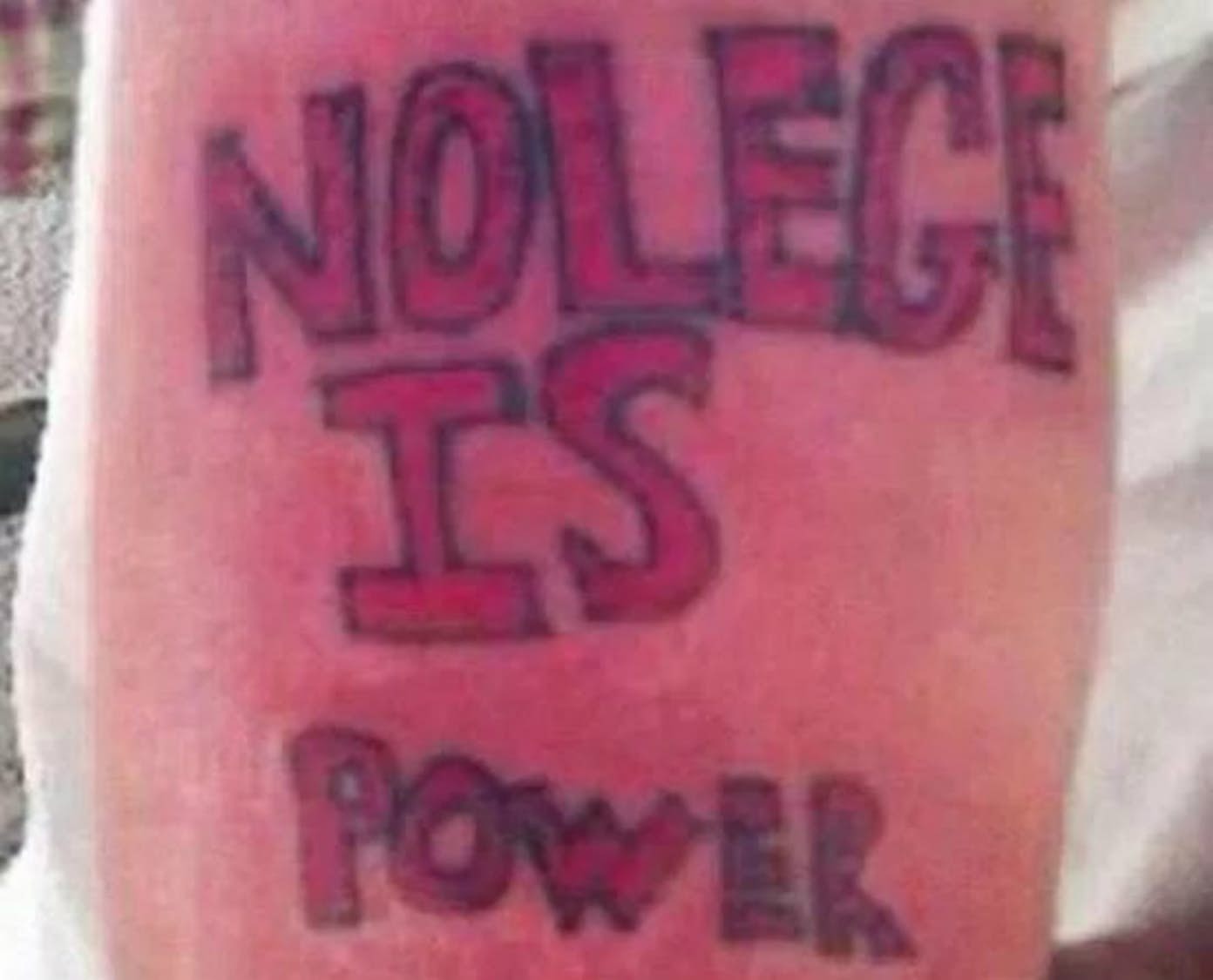 This one actually makes me laugh. If it was done on purpose, it’s hilarious!

Something tells me that is wasn’t, though.

Knowledge really is power. There is no truer statement, in my opinion. Knowing how to spell knowledge is just a bit of knowledge this person missed. Nolege is not power. Or even a word.

I have no clue how this happened, but judging the horrible artistry, as well, I’m not surprised they can’t spell. Perhaps it’s homemade. Surely no respectable artist is this bad their craft.

Head shaking material for days, this one. 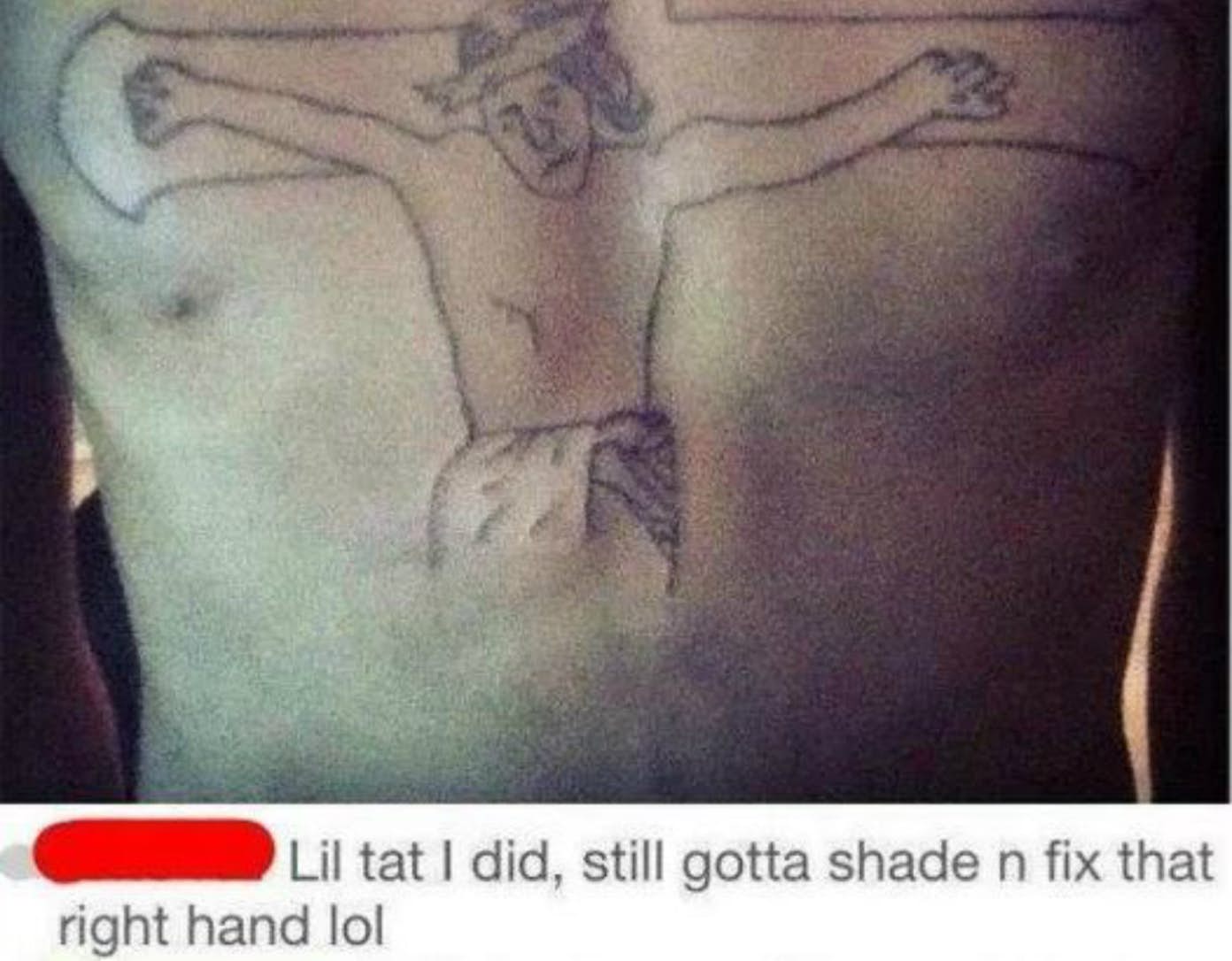 There are many people that get tattoos to honor Jesus or whoever it is they worship. There’s nothing wrong with that.

I would think that honoring your Lord and Savior would include making sure the tattoo looks great.

This chest piece of what is supposed to be Jesus on the cross looks a little more like a sad man drawn by a child.

The artist thought enough of it to post about it. Saying a little shading and fixing the right hand would make it perfect.

It’s really bad and I can’t imagine that the person who received this was in any way happy with the result. 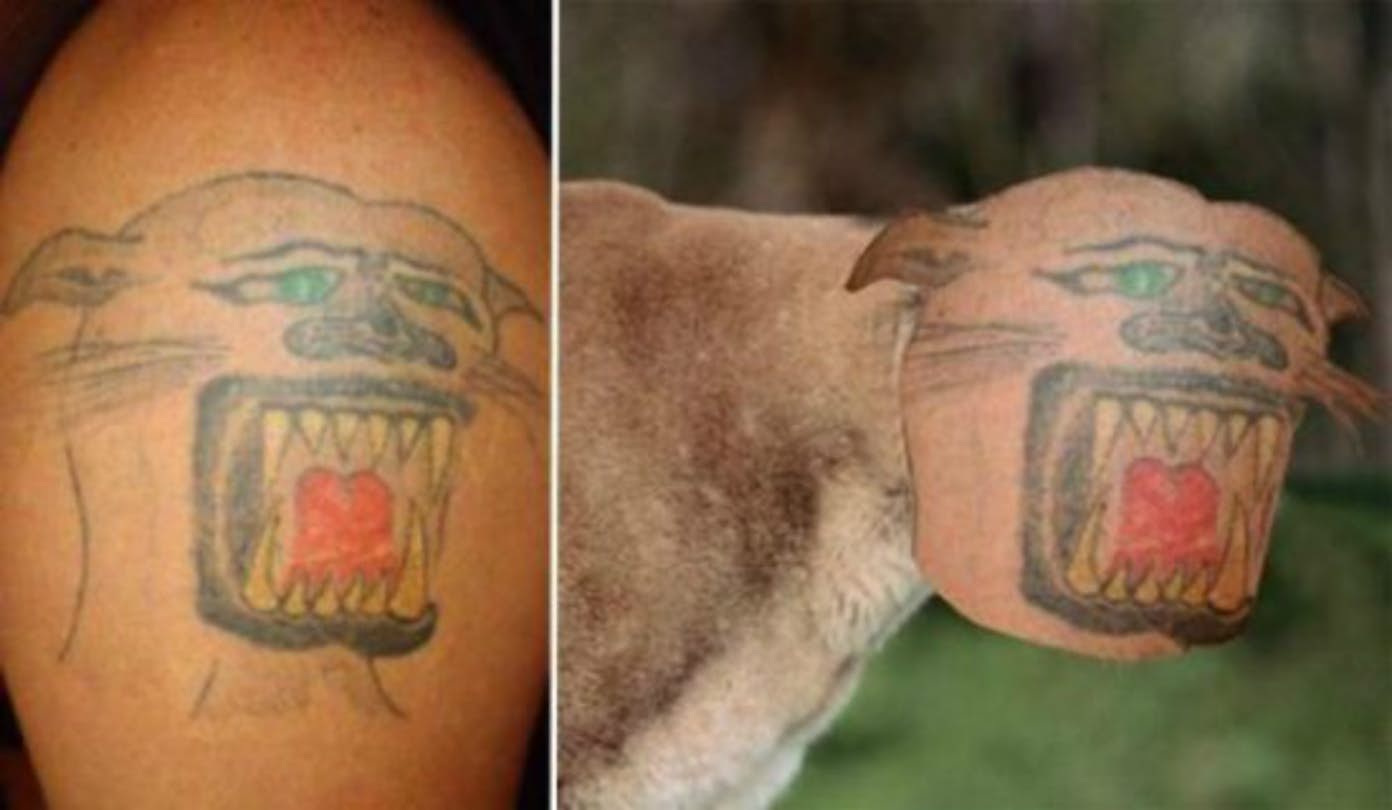 Big cats are a common tattoo subject. I’ve seen some amazing ones. A friend of mine has a beautiful black panther across his back.

I imagine that the person who went in for this ink wanted something realistic and regal looking. This is not that.

It’s not horrible, if they were going for a cartoonish looking tat, but I’m willing to bet they were not.

I guess they get props for the fact that we can tell what it’s supposed to be, but not many. 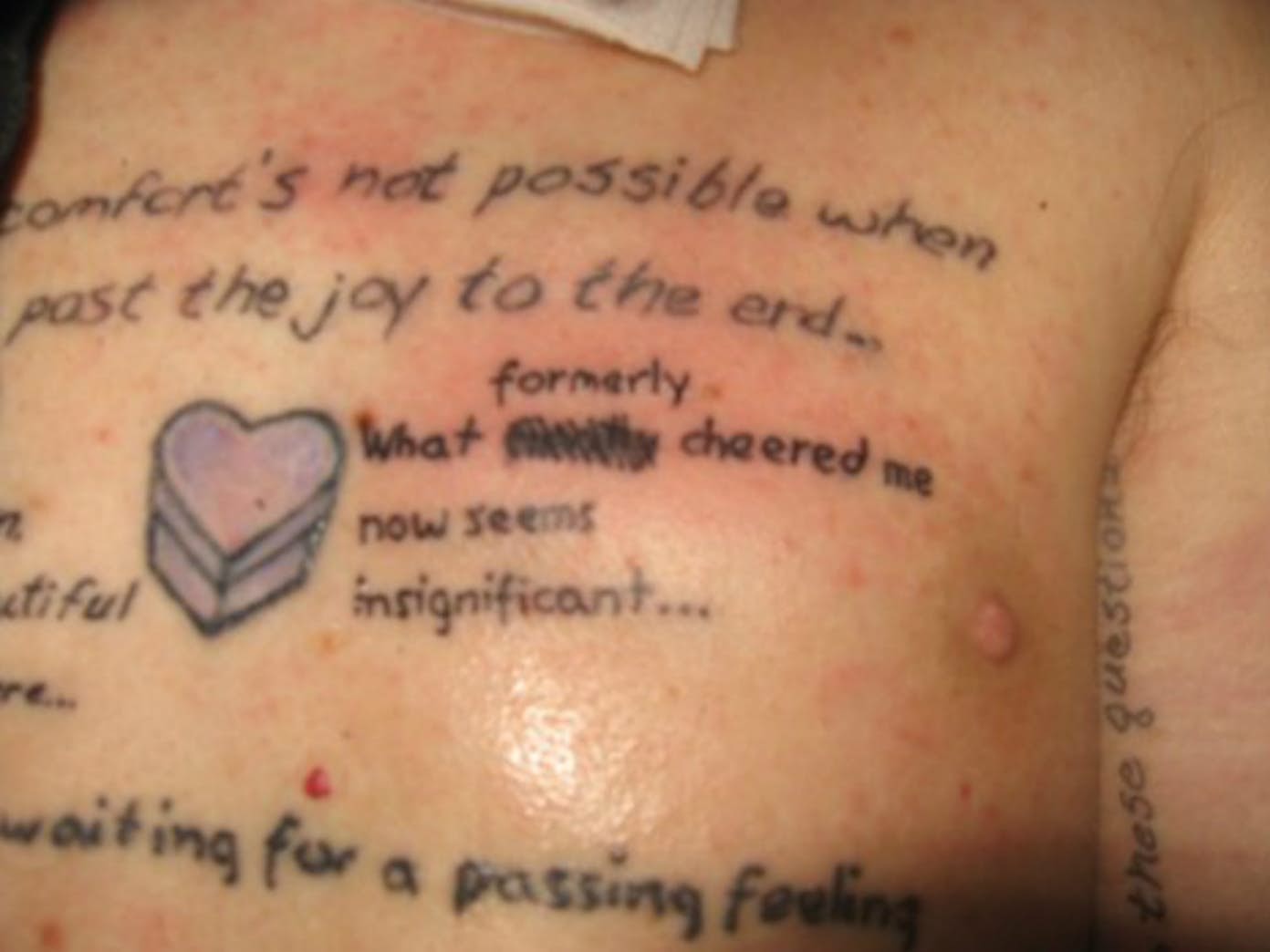 So, you know how when you’re writing and you mess up, and you just scribble out the word and write what you want above it?

That’s not something that should be included in a tattoo.

I guess you figured out by now that the next example contains just such an offense.

Is it even worth discussing further? I think not. I’m not sure if I’ve ever shaken my head more than this. Wow. 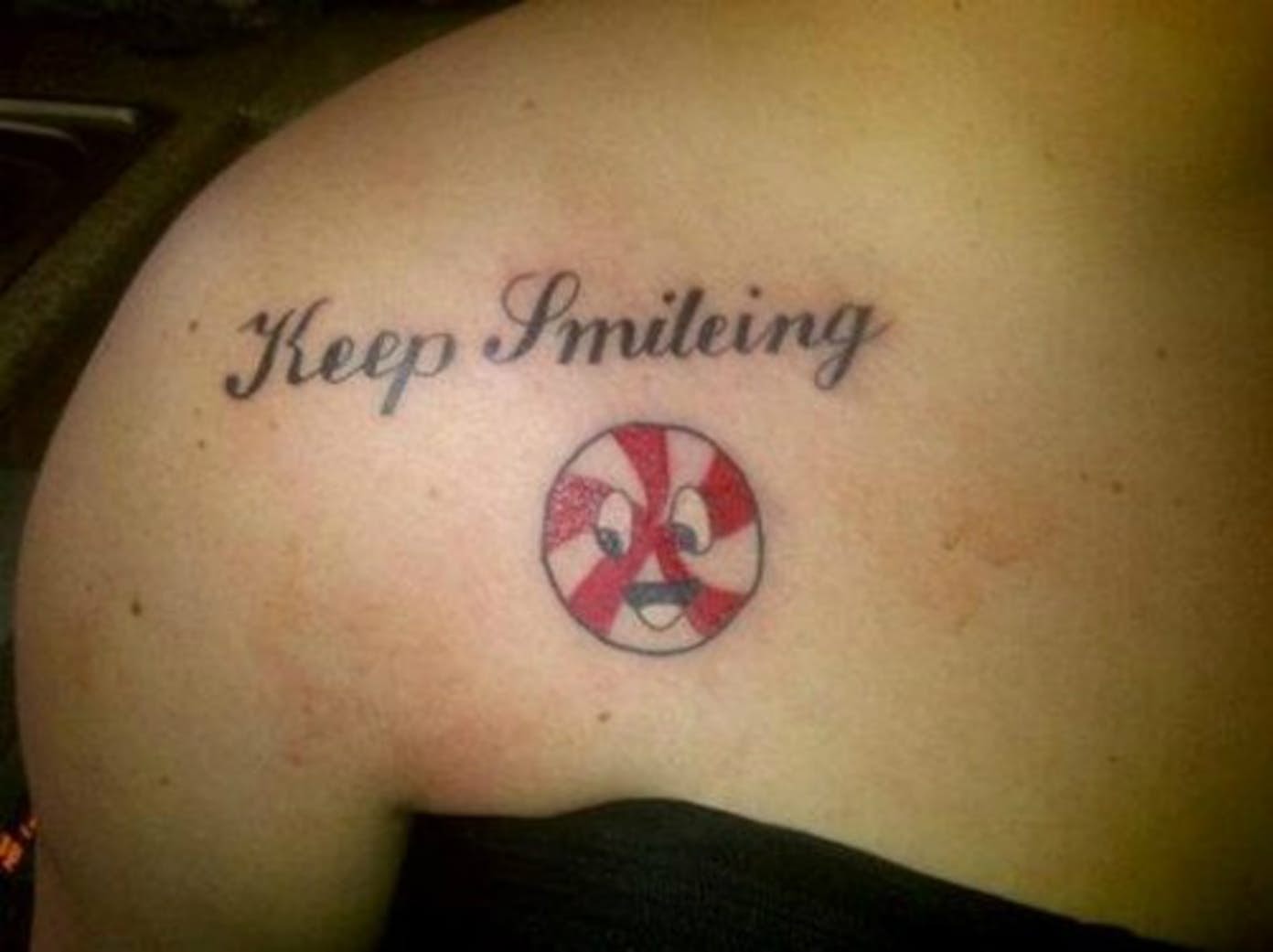 Another fantastic message, that would totally make a great tattoo is ‘keep smiling.’ What a nice sentiment.

A reminder to yourself and those around you that things always get better.

The rules of spelling escaped this one. They forgot one of the most basic rules, which is the drop the eve before adding ING. I had that one down pat in first grade.

Keep Smileing is just wrong, and overshadows the positivity I’m sure this person wanted to convey with their ink. 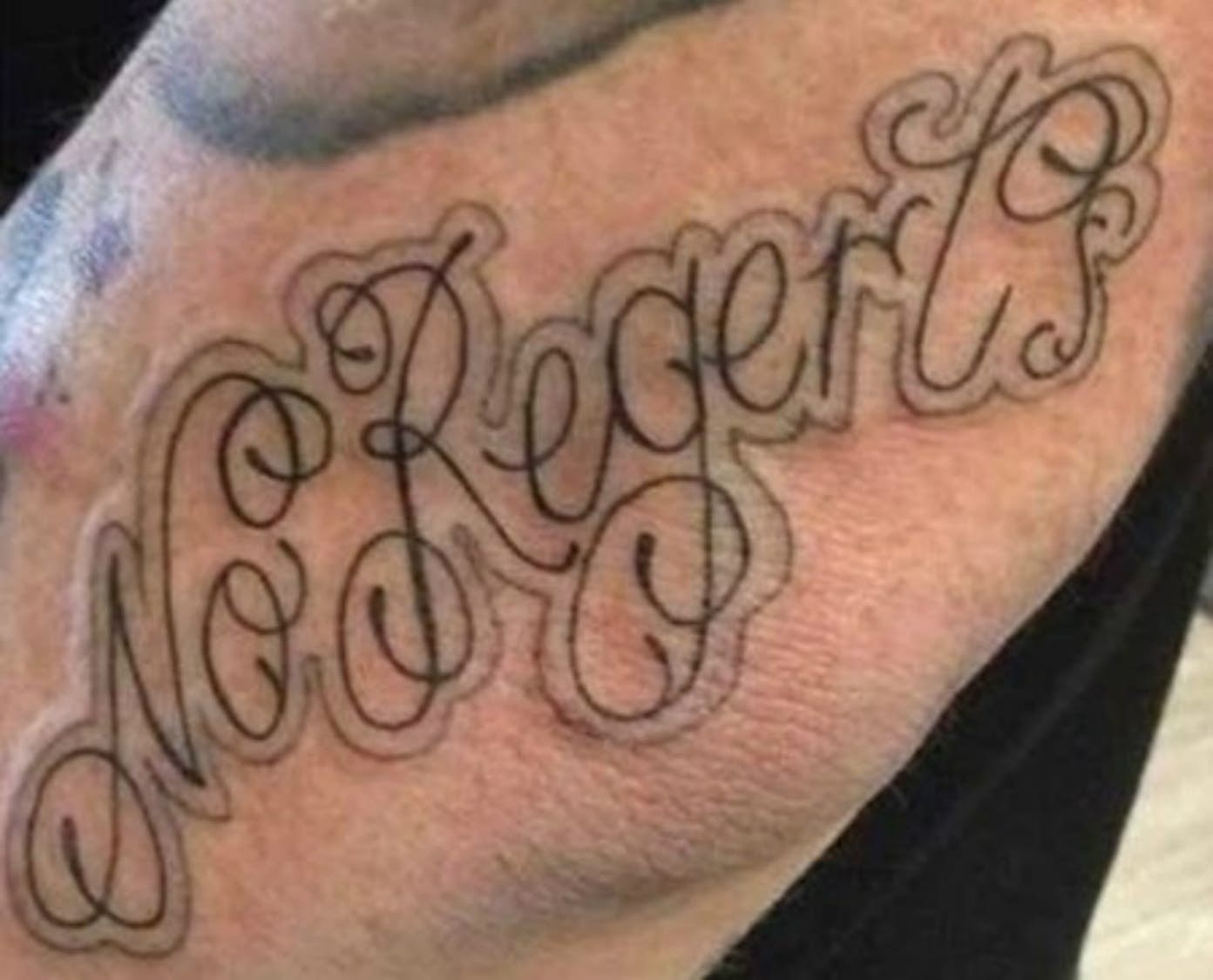 I was really hoping that the Milky Way commercial and the no regerts tattoo was fictitious, but it seems to be true.

I guess it can be described as an innocent mistake. Regrets, regerts. It’s a mere swapping of two letters. It could happen to anyone. But, isn’t that what the drawing and transfer are for? To work the kinks out?

I would just think that if I was going to be tattooing permanent ink on someone’s body, that I would double check the spelling way before I actually put a needle in their skin.

Kind of ironic, because I’m pretty sure they regret this decision! 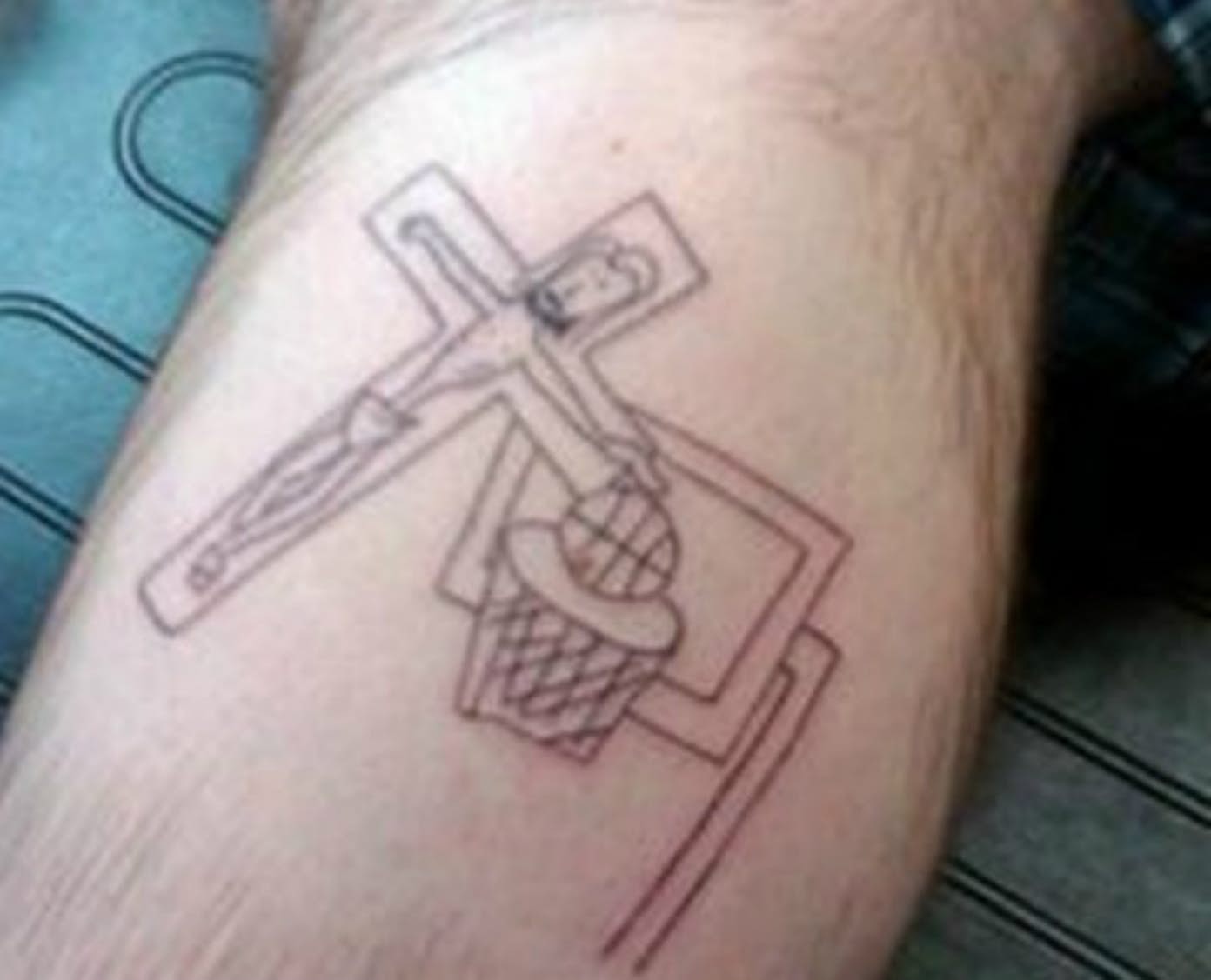 Have you ever truly been speechless. If not, get ready for this.

It’s one of the most blasphemous renderings of all time. Am I being dramatic? Only slightly.

Another Jesus on the cross tattoo. Just as juvenile. Horrible artistry. This time, he’s apparently attempting to make a slam dunk.

Yes. That’s right. Jesus Christ. On the cross. Dunking a basketball. I can’t even. 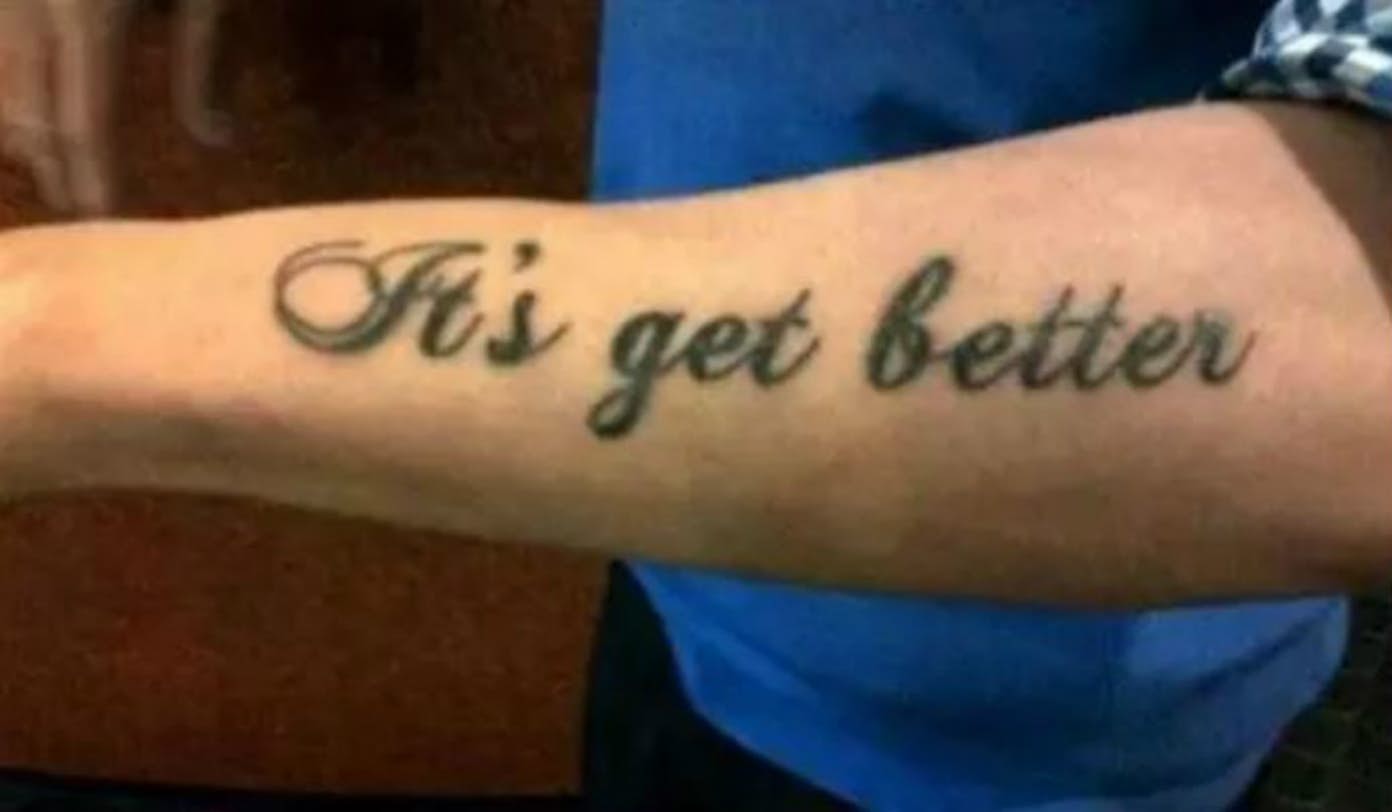 I am really saddened to see all of these tattoos that are meant to be inspirational, and uplifting, turn into hilarious fodder that end up in articles like this.

I feel like this person wanted to be able to always remind themselves that “it gets better“ because they had been through a lot of trauma in their lives.

And instead of getting what they asked for, now they have another traumatic event that they’re going to have to get over. ‘It’s get better’ makes no sense, and I am baffled as to how this could have taken place by someone who deems themselves a professional tattoo artist. 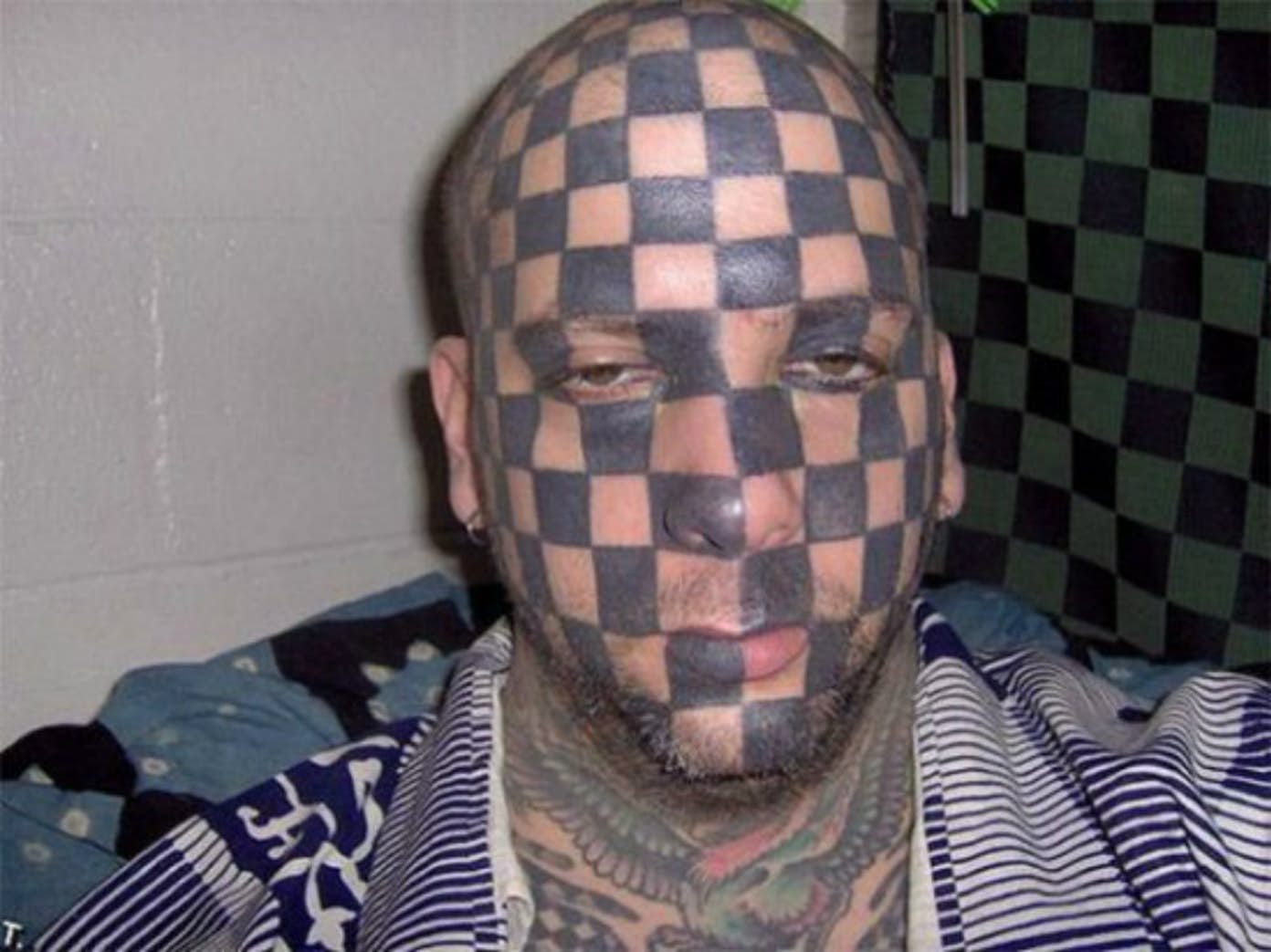 Look, I love to play checkers as much as anyone, but I would never get a checkerboard tattooed on my face. Would you? I’m betting that the answer is no.

This guy went into the tattoo shop and asked them to create a checkerboard from one end of his face to the other. Little black squares next to squares of his flesh from forehead to chin, ear to ear.

Seriously? But why, though? 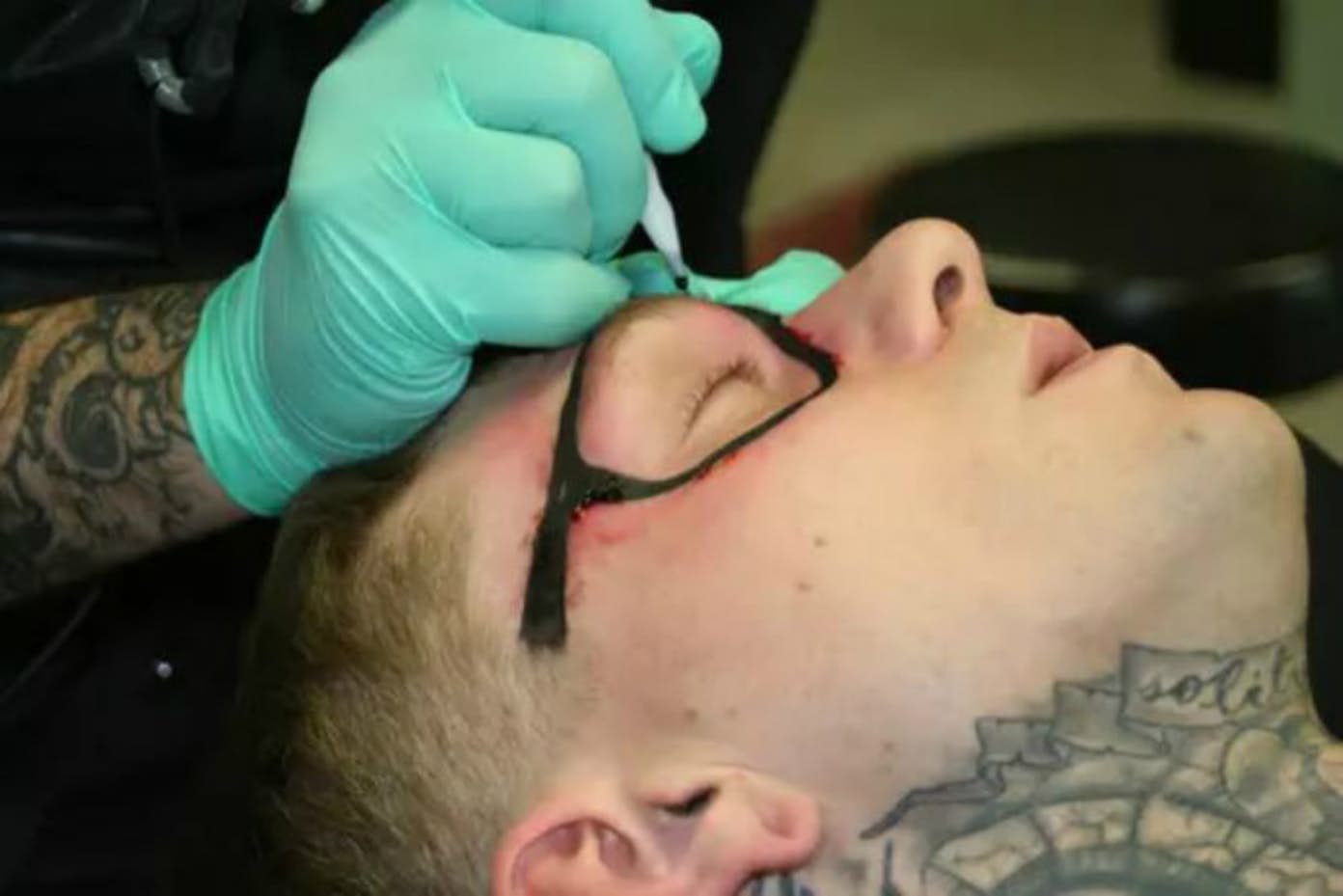 Glasses have become somewhat of a fashion accessory in recent years. They aren’t just for people who need to correct their vision, anymore. I know several people who wear glasses with no prescription, just because they like the way it looks.

Nothing wrong with that at all.

To each their own, always, but I wonder what this guy was thinking when he decided he wanted to get eyeglass frames tattooed on his face. I just can’t think of any reason that someone would think this was a good idea.

What if he ends up having to actually wear glasses one day? How is that going to look? Not very attractive.

I’m sure he has his reasons. 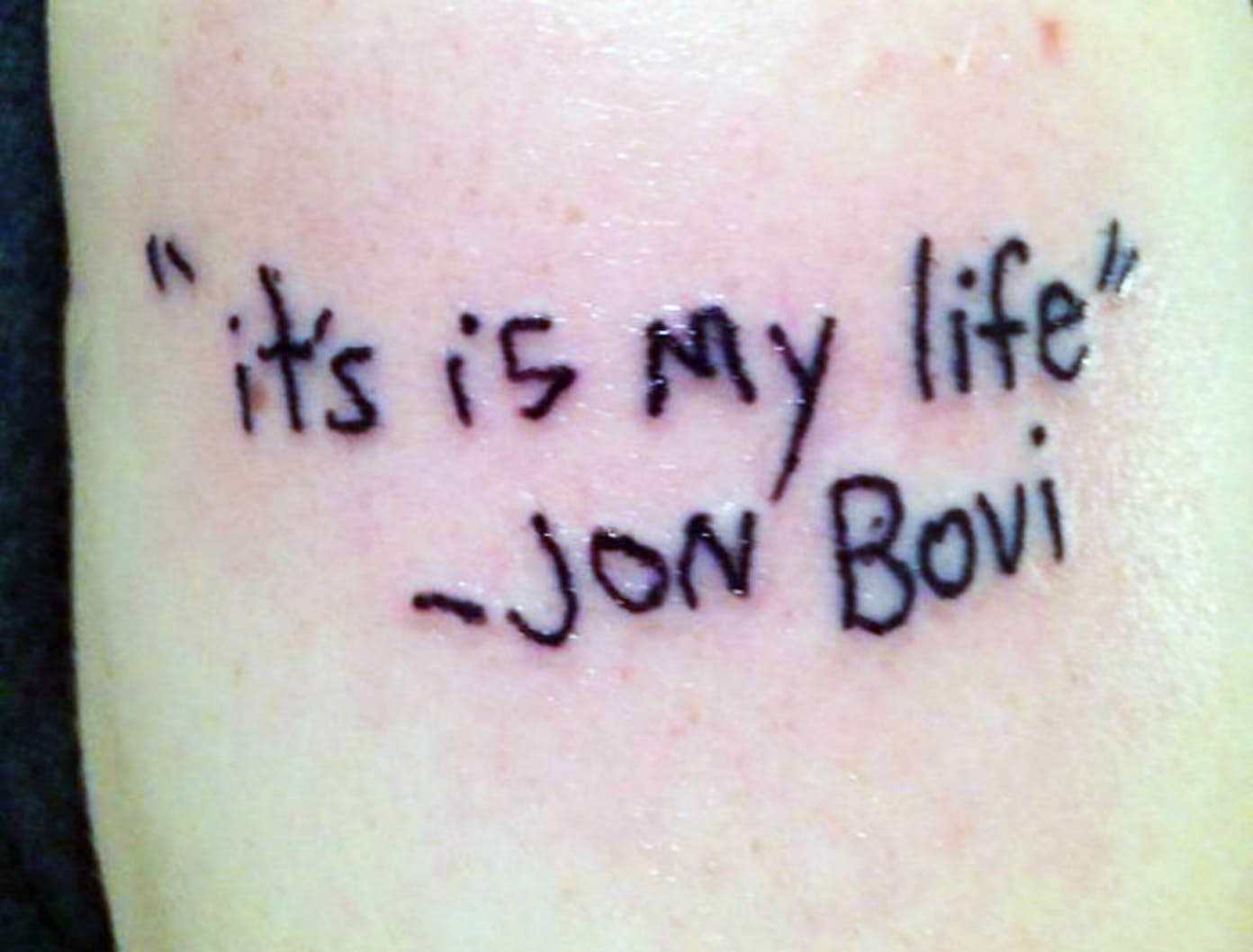 Bon Jovi was one of the greatest bands in the 80s and 90s, and are still popular today with people of a certain age.

They have a lot of lyrics in their songs that are seen as meaningful by many.

What we have here is a case of another tattoo gone awry by bad grammar.

And his name is Jon Bon Jovi. Not Bovi. Jon Bovi. Wow.

Getting a tattoo was a very personal decision. It is not one that should be made lightly. A lot of thought, research, and maybe even a second opinion should be put into it before you make a decision.

Making sure that you are going to a reputable artist is key. And making sure that they will check their grammar and spelling before they touch a needle to your body is important as well.

You should really be sure that they actually know how to do this. Unless you want to end up with a cartoon cat, on a list like this, check their portfolio before agreeing to let them tattoo you.

Some weeks ago, Jimmy came out with a call for tweets asking people to ruin a movie using just one...

If there’s one thing that can make any regular sentence instantly sound sketchy, it’s some misused...

There are countless styles you can choose to rock as a man. Maybe you’re into street style and love...