There’s a certain power in knowing the context surrounding a great photograph. A moment is captured in a single shot, but knowing the events that transpired before and after can bring even more meaning to the image itself.

Certain images, however, are better precisely because they lack any context whatsoever. Sometimes it’s better to dust off the old imagination and sit back and enjoy the hilarity of misinterpretation.


Sure, there might be some perfectly rational explanations for a few of these photos… but we don’t even want to know what they might be. Some things are simply better left unexplained!

1. “Can you turn on the bubbles? Things are getting a little bit stale in here. Oh, and do you have any bath toys? We’re really starting to get bored.” —These tigers, probably in unison. 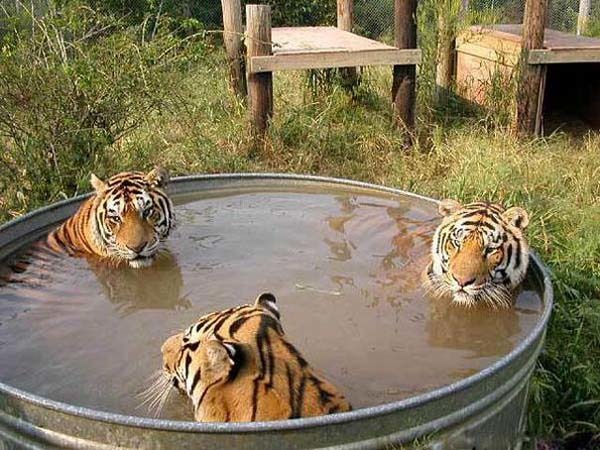 2. This begs a lot more questions than it answers. There are so many elements at play here. Front and center we have the tux/sewing machine combo. Then there’s the UPS truck in the background. If you look closely, you can see the driver smiling in the background, so maybe this isn’t as disastrous as it looks. It’s just… there’s so much going on. 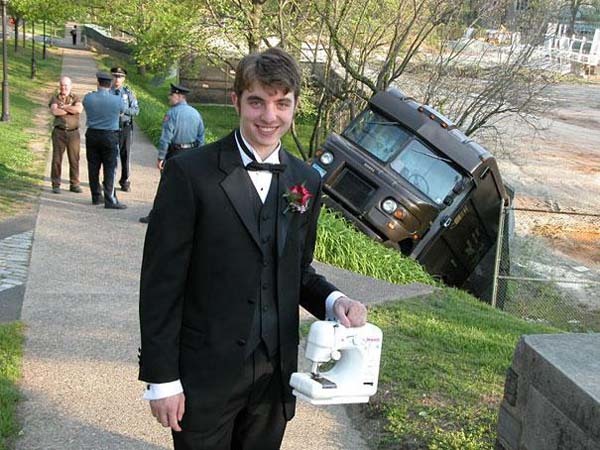 3. “You’re not in Ape College anymore, bro. You can’t drink like that. You’re orangu-tanked, right now.” At least the poor guy has some friends there to comfort him in his time of need… and some who have no problem documenting this embarrassing moment for posterity. 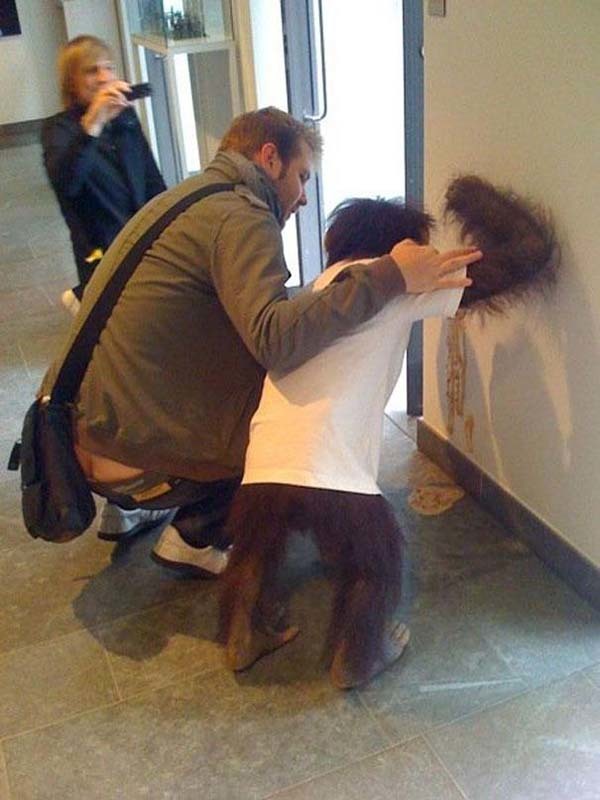 4. “I think I’m going to leave my wife,” Ted the Shiba Inu thought to himself, the fourth glass of Chardonnay bringing forth a long-gestating realization. He felt the weight of this moment wash over him like only a dog at a bar could. 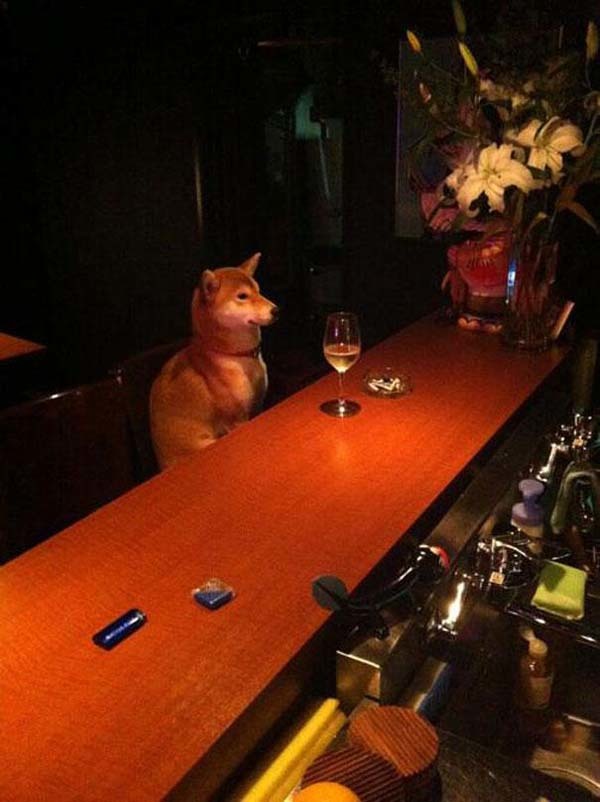 5. “Tigger? Tigger??? Tigs? Man, don’t do this to me. Say something—anything! Tigger, get up! WHAT DID THEY DO TO YOU?! THOSE BASTARDS! They will rue this day forever. Rue it, I say!” 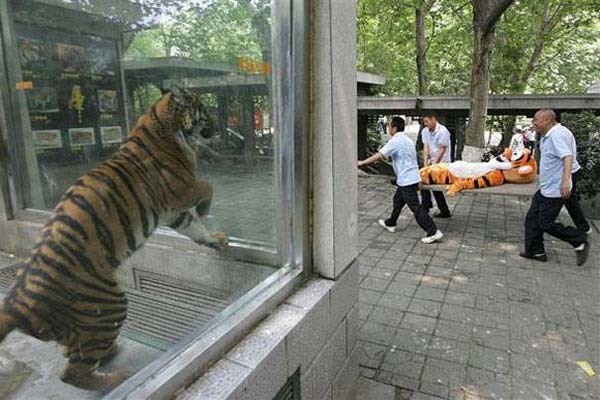 6. Coming to Pay-Per-View this spring: The Adventures of Sliced Breadman! After being bitten by a radioactive slice of Wonder Bread, Davy Rye gained the ability to grow slices of bread all over his body. 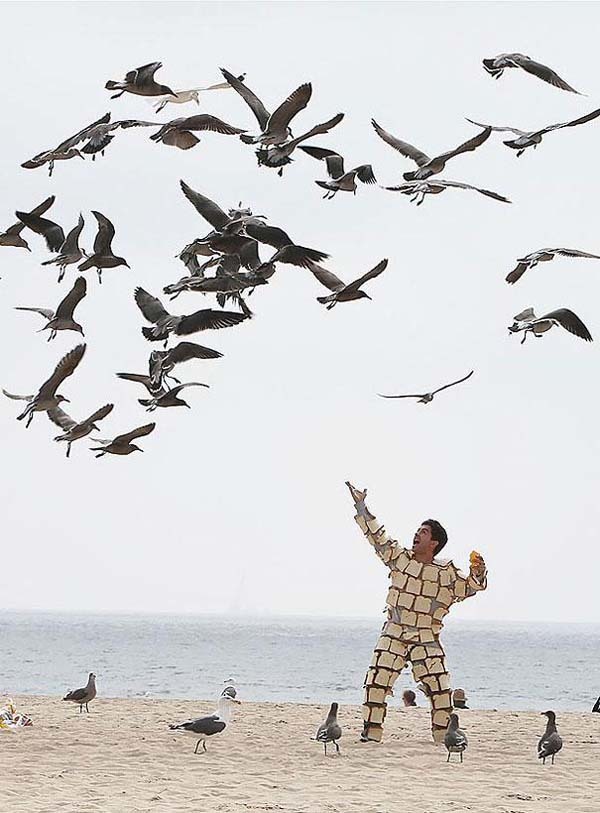 7. “I TRUSTED YOU.” So, this cat is clearly very upset by his present circumstances, but let’s not gloss over the fact that the human behind him is seemingly naked. Who showers with their cats? 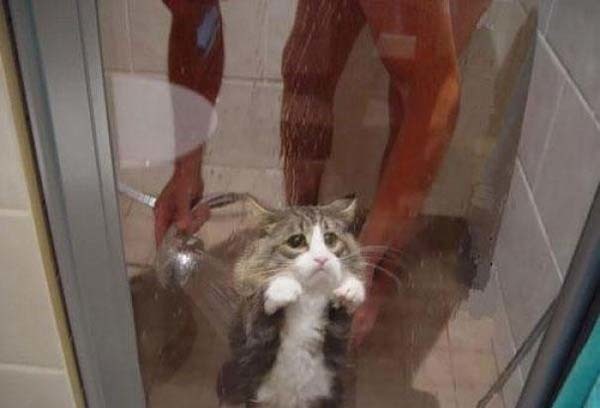 8. This is pretty par the course for this dude. Golf puns aside, how in the heck does someone go about falling into a whole bunch of cacti like that? Is that question also why all of the rescue guys look so darn perplexed? 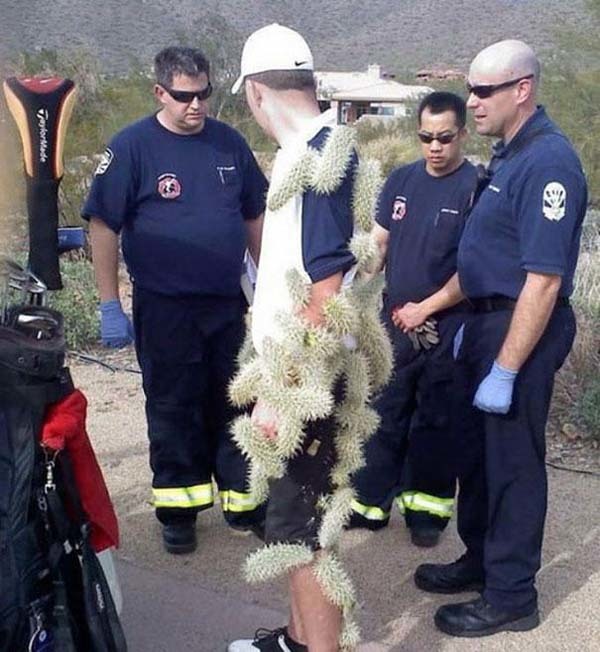 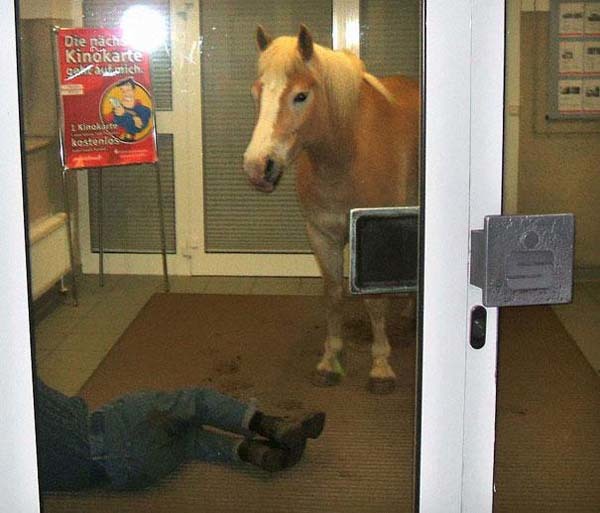 10. “Thank goodness we got one with everyone’s eyes open!” For real, this is weird enough on its own, but then you notice the expression on that doll’s face, and everything gets extra creepy. The dog seems to realize something is very strange about all of this, too. 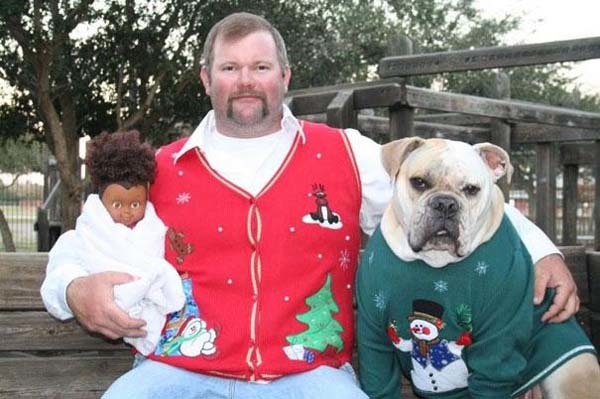 11. KFC menu items just keep getting weirder. First there was the Double Down, and now… this? What in the world is happening over there? Even weirder: this is on the Dollar Menu. 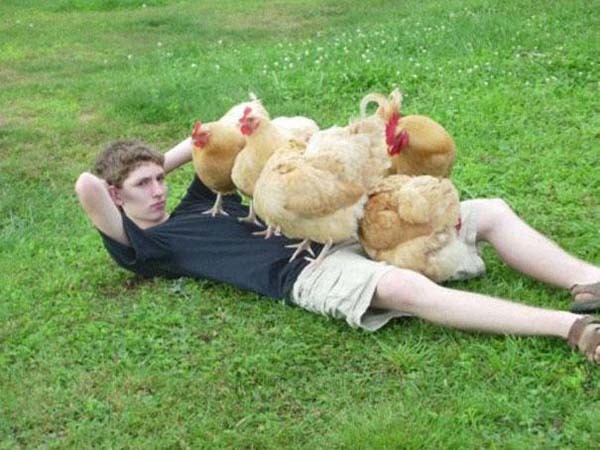 12. “My family doesn’t like that she’s vegan, but we make it work.” Really, though, take a look at the sketch of the deer on the wall back there. Think the deer appreciates that? 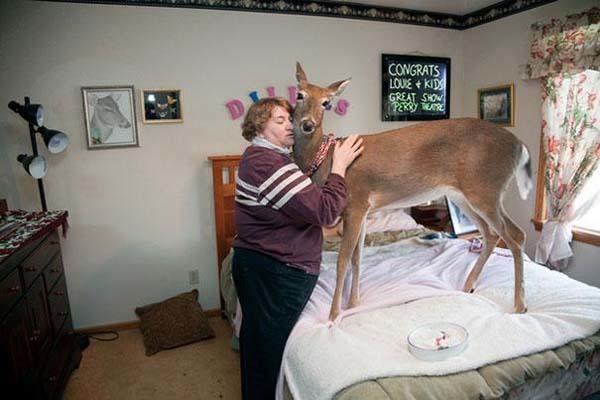 13. Florida’s favorite pastime. He looks sort of bemused by it, but his girlfriend is just lost in there. She’s never going to look at anything else ever again. This is it for her. Shame, really. 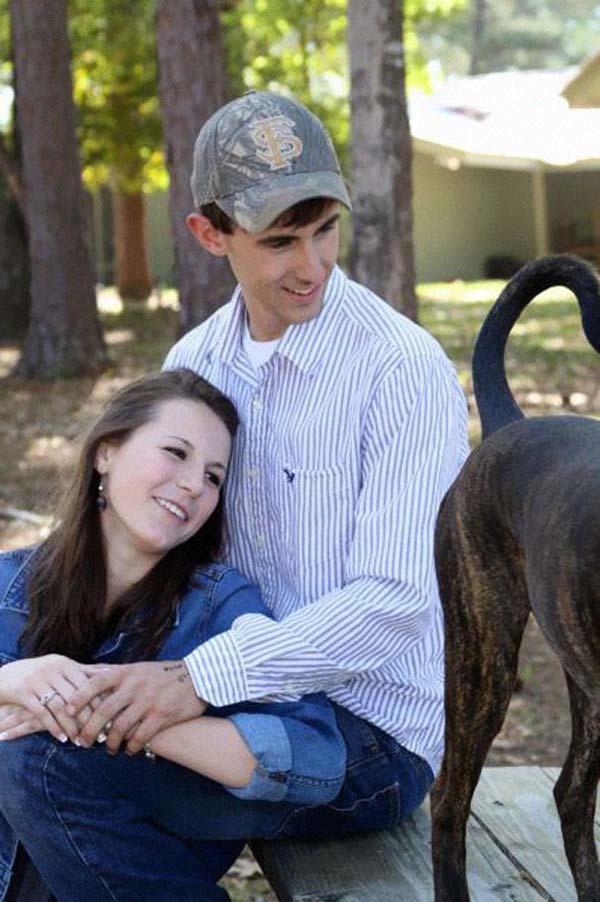 14. The sequel to Lady and the Tramp took an odd turn… actually, maybe this is just part of the origin story for Breadman? (See #6.) Who would have guessed that it would involve a buffalo this time? What a plot twist! 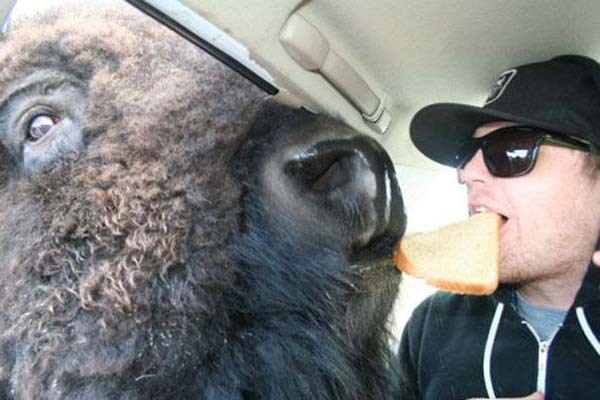 15. Sure, you don’t like to go to public spaces dressed as some sort of shrubbery and lean against a tree, but then again, have you ever actually tried it? We didn’t think so. Judge not lest ye be judged. 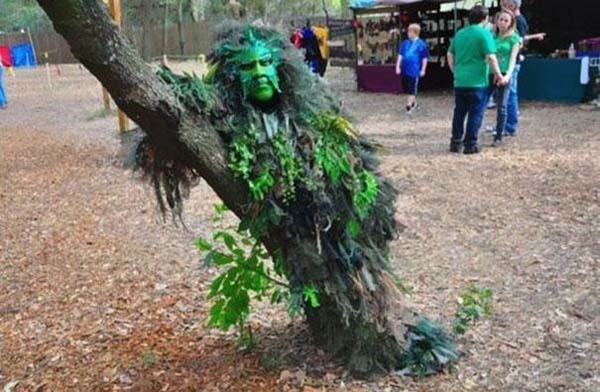 16. “I’ll take the steak.” Just what is happening here? The picture makes that woman’s face look like it’s 2D. She’s just drawn right into the photo like how they used to edit film before computers. 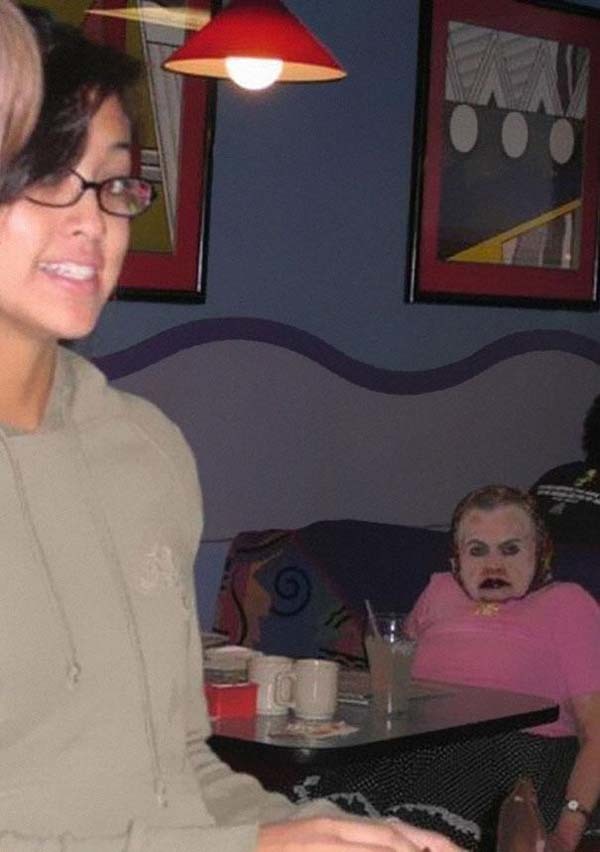 17. “Go easy on me, Teach. I’m a slow learner.” —This sloth, before he aces every single test, becomes the first member of his family to attend college, and is eventually elected to the US Senate. 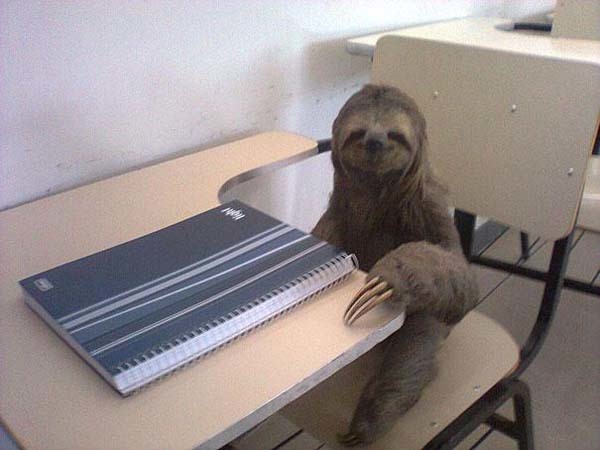 18. The one in the middle looks like she has to sneeze. Someone stick a finger under her nose before it’s too late. Quick! She’s gonna blow! Use the table cloth as a tissue, or something! 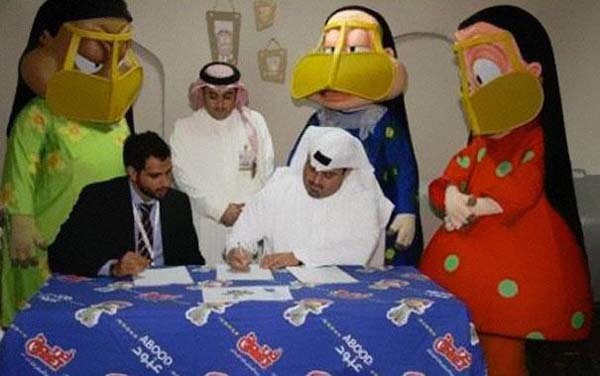 19. “For fox sake, let’s speed things up, Leonard. Some of us have places to be.” For real though, that kid in the back looks so darn upset by that fox being in line there. He has no time for this fox’s ATM shenanigans. 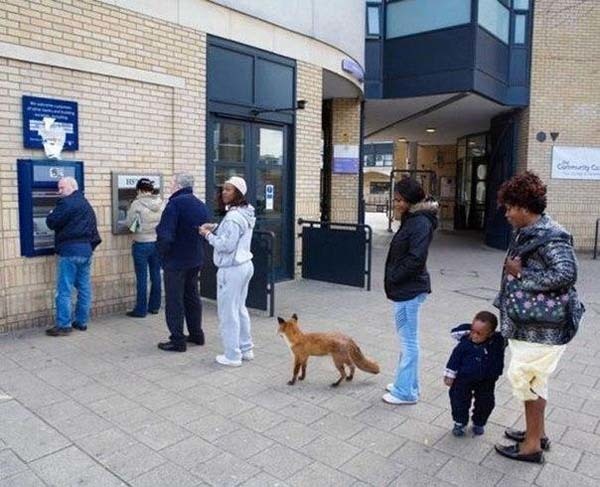 We like to imagine the sloth is always late to class, but dammit does he want to learn! Those were confusing, but the laughs were worth it. Please, no one tell us what’s going on here, because they’re just way better unexplained.

Share these hilarious and totally bizarre photos with your friends below!