Nutella is a jar of creamy deliciousness. Some eat it as a spread on a piece of bread along with marshmallow fluff. Others, like to dip fruits into it. And some people grab a spoon and dig in, eating it straight out of the jar. If you haven’t tried Nutella yet, I can bet you will try it sometime soon. Below, there are 13 facts that you might not know about Nutella. 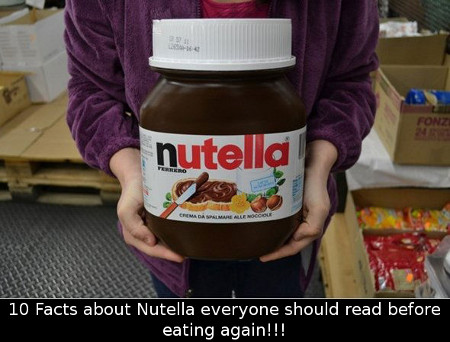 1. Nutella was created by an Italian Pastry Maker after World War II
During World War II rationing was very difficult to do. In Italy, times were even tougher after the war was over. Mr.Pietro had the problem of not having enough chocolate as a pastry maker. He was a very creative man thankfully. There was a large amount of Hazelnuts in the Piedmont region of Italy. So, he used them and combined them with his delicious chocolate.


5. A “Nutella tax” was wanted to be passed by France
Since palm oil has a health risk, and the use of it has lead to deforestation in Indonesia and Sumatra. The orangutan population has been endangered because of this reason. Senators in France wanted a large tax hike on the palm oil. An average citizen of France takes in about 2 kilograms of palm oil every year. That means, all of Furnace consumes 126,000 tons of palm oil in a year.

6. A $3 million dollar loss for Ferrero was a result of false nutrition claims
It seems that not everybody knew that Nutella wasn’t the healthiest thing to eat. The makers of this delicious treat agreed to a $3 million settlement that stated they did not know that it was not healthy and they should not have been claiming it to be. They have to change Nutellas label to stop advertising that it is good for you, on top of paying the 3 million dollars.

7. Nutella is manufactured by the same company as Tic Tacs
The worlds biggest chocolate producer is Ferrero. They produce Nutella, Ferrero Rocher, and Tic Tacs. They also created a line of Kinder products. They are most well known for Kinder-Eggs.

8. Nutella will burn
Amazing. This stuff really burns. The same will go for any product that is so high in fat content and a few carbohydrates. But, I really would just want to eat it. Not burn it !

9. There is a day set aside just for Nutella
February 5, 2015 was the first world Nutella day. It has its own page on Facebook with tons of fans.

10. You aren’t dreaming when you see a 5kg jar of Nutella
These will come in handy for food service professionals. Nutella can be bought in a king size tub that weighs over 11 pounds. It is perfect for bakers and chefs, according to the company. They can also purchase what is known as a portion control pack, weighing in at just 20 grams.