An unnamed man, who was bailed out of jail, tried to steal a car only to be outsmarted by the car’s robotics. According to official reports, the thief in question targeted the car, which was parked in Jingili, Australia, on the 16th of February this year, and worked his way into the vehicle. 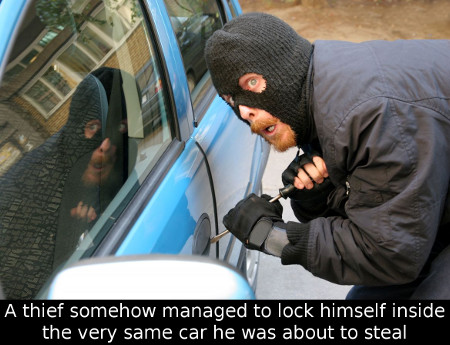 However, he found himself locked inside the car shortly after he broke into it. As it turned out, the owner had activated the automated child locks, which locked the thief inside the vehicle. The trapped man started panicking and drew so much attention to himself that he car’s owner, who was nearby the parking space, spotted him. The owner and one of his friends unlocked the vehicle so that they could have a little “chat” with the thief, but the latter just bolted out and ran past them. Fortunately, nearby police officers managed to catch the thief just in time.
It turned out he had indeed stolen something – a small amount of money, which the owner had left in his car. The thief was charged with breaching his bail, stealing and trespassing.