A 27 year old man was fined after he was caught playing a trumpet while driving a vehicle. According to official reports, the Melbourne police received multiple complaints regarding a reckless driver operating on a black Toyota sedan on the streets of Melbourne, Australia. 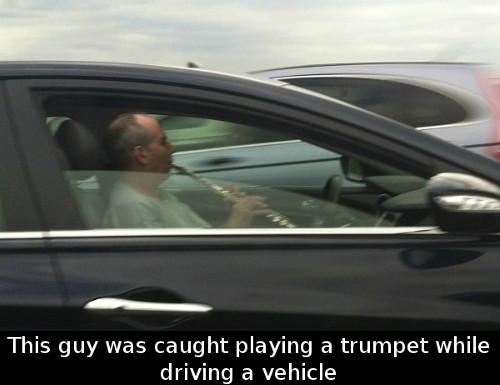 The Highway Patrol police officers chased down the described car and managed to pull over the vehicle on the West Gate Bridge. As it turned out, the driver had a solid reason for driving erratically – he was tooting his horn. Unfortunately, his horn turned out to be a trumpet. The 27 year old driver was reportedly playing his instrument behind the wheel while trying to navigate his car. The shocked police officers couldn’t believe their eyes when they saw him.
Adam West, a Senior Constable at the Melbourne police, reported that the driver was fined $276 for his actions. Let’s just hope it was enough to beat some common sense into his head.