A tattoo artist tattooed his name across his girlfriends face. This happened less than 24 hours after they first met each other.

Her name is Lesya Toumaniantz and she is from Russia. She allowed her then boyfriend to tattoo his name which is Ruslan, across her face in huge Gothic Script the very same day they met. 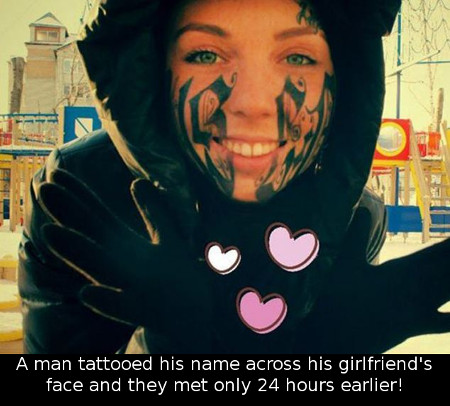 They met in an online chat room and then quickly fell head over heels in love with one another. They then met in Russia and then, got married.
She says “It’s a symbol of our eternal devotion. I’d like him to tattoo every inch of my body.”

The tattoo artist is a former art student and his sister is also a tattoo artist. His sister tattooed All For Love over her eyebrow.
She says it is “All for Ruslan”