A German doctor became the very first person to cure HIV by using an innovative method and absolutely no anti-HIV medicines – he did it through a stem cell transplants.

Gero Hutter, a German hematologist born in 1968, managed to successfully cure an HIV positive patient back in 2008. Hutter’s patient, an American named Timothy Ray Brown who was residing in Berlin, Germany, was suffering from AML (acute myelogenous leukemia) and was HIV positive. 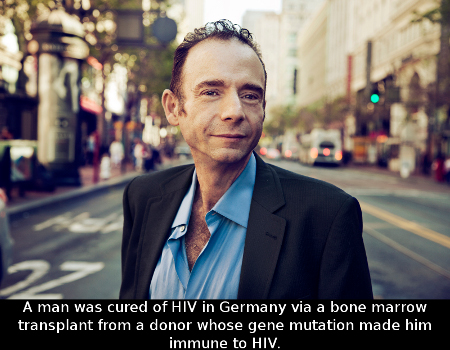 Hutter used bone marrow from another person, who reportedly had a mutated CCR5 receptor (a white blood cell protein). Since the HIV attacks the immune system mostly through the CCR5, the transplanted bone marrow turned out to be magical. It not only cured Brown’s leukemia, but it also lowered his HIV levels. Brown went off his anti-HIV medications and he continued going to regular check-ups. As it turned out, his HIV levels dropped so low that nearly two years after the transplant they were already undetectable. Brown’s tests turned out negative, even though he had stopped using his drugs shortly after the transplant.
Hutter was praised among a list of successful Germans as one of the most notorious Berliners of 2008 for this phenomenon. In 2010 the AIDS Policy Project gave him an award for his incredible achievement.