The Chernobyl disaster is the largest and most fatal nuclear disaster, which has ever occurred up to date. More than 50 people died directly on the spot while hundreds of thousands of others died from radiation and cancer shortly after the explosion.
One of the many people, who died in the explosion while trying to save other people’s lives, is Aleksandr Lelechenko. 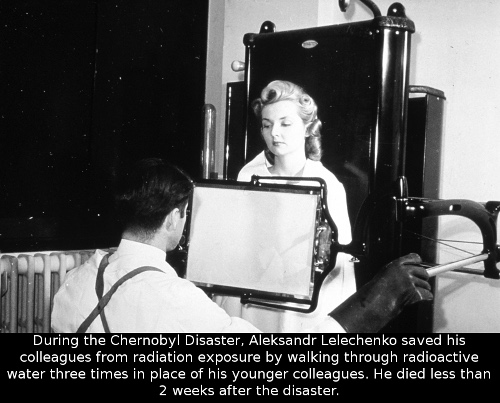 Lelechenko was born in 1938 in Ukrainian SSR and was in his late 40s when the nuclear power plant malfunctioned. He was deputy chief of the electrical shop and managed to arrive in the control room of block 4 just as the explosions started. Lelechenko tried to save his younger colleagues from the inevitable exposure to radiation by sacrificing his own health and life. He exposed himself to deadly radiation by doing through radioactive water a total of three times. First off, he switched off the electrolyzers and hydrogen feed to the generators. He also tried to supply voltage to the feedwater pumps. He had to receive first aid before he returned to the nuclear plant in order to work in the disastrous conditions for several additional hours.
He died less than a couple of weeks after the explosion.