It used to be that you could believe what you saw in pictures. These days, you never can tell if what you’re seeing, or reading, for that matter, is real or not.

The internet is amazing. A wealth of information and entertainment right at your fingertips. You don’t even need a computer anymore to use it. It has definitely changed the way the world works in a lot of ways.

You can write papers and reports without having to ever crack a book. You can watch your favorite show if you missed it while it was on the air, and you can reconnect with friends and family all over the world. Thanks to the worldwide web and the amazing advancements in technology, long distance calling no longer costs and arm and a leg. It’s free all day on many platforms, not just after 9. Now, I’m showing my age with that one.

All of this to say, that although the technology of today is amazing for the things I’ve already brought up, it can also be used for lies and trickery. This makes it hard to know what is real or not when you see it on the web. There are programs such as photoshop that can make the impossible seem real. I mean, if you’re seeing with your own two eyes, how can you not believe it, right?

Unfortunately, this makes everyone a skeptic when it comes to amazing photos. Sometimes a shot happens that is so amazing that nobody believes that mere timing, luck and light are to thank!

Below are 13 examples of photos that are totally real, but nobody believed it! 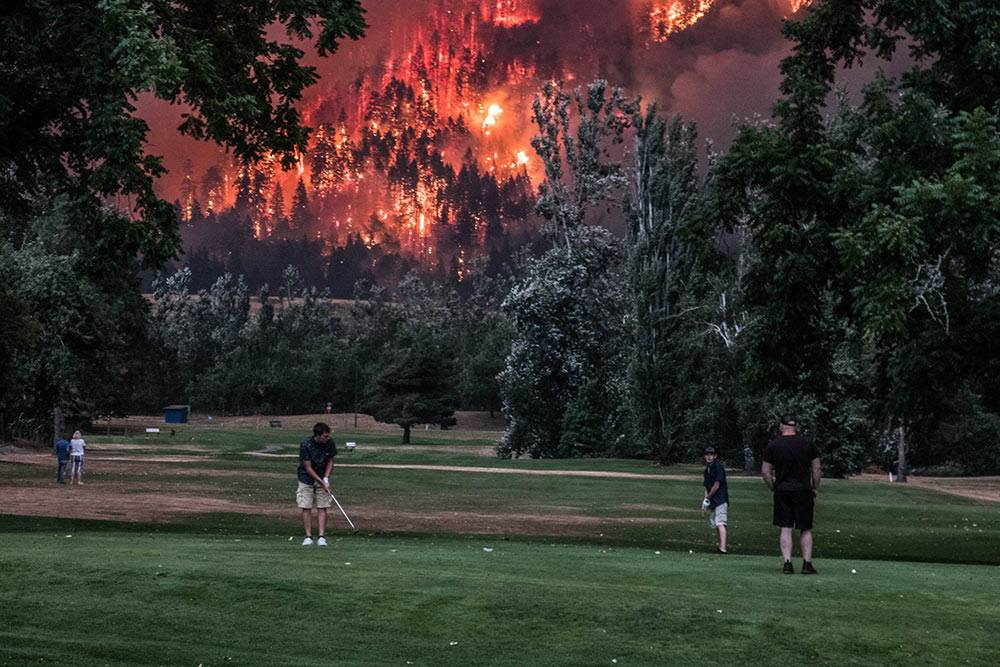 Amazing shot of a man casually playing golf as a wildfire rages in the background might seem alarming to most. The fact is that there were over 100 people hitting the links that day. Although the fire looks like it is directly behind the golf course, because of the rise and fall of the landscape, this wildfire was actually over a mile away. And from the looks of it, they were not downwind because it looks clear and not hazy. I’m not sure I could not take my eyes away from the devastation happening behind me long enough for even 9 holes, but it is what it is. I guess they figured if they can’t help it, they might as well enjoy their day and keep their tee time.

2. Little girl at the burning house 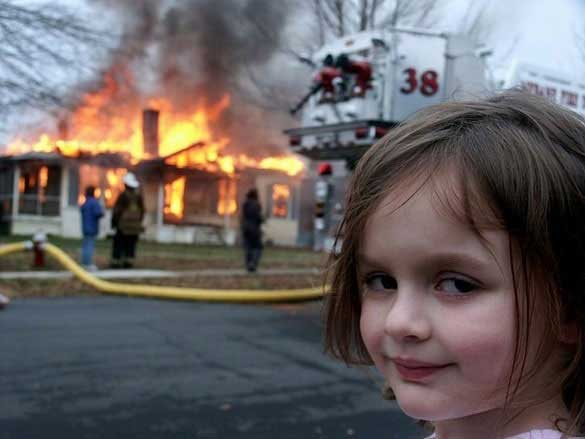 We have all seen this photo. The girl who looks pretty evil while a house just across the street from her is going down in flames. It has been used probably millions of times to depict a moment when someone just doesn’t give a hoot about the mayhem that they may or may not have caused. Many believe that it’s a great photoshop job, but the truth is that it is one hundred percent real. The little girl is named Zoe Roth and this picture was snapped by her dad in 2004. She was just minding her own business, watching tv with her brother when they heard about the fire down the street from their house. They all walked over to see and that’s when this treasure of the worldwide web and meme hall of fame was born.

3. The water is high 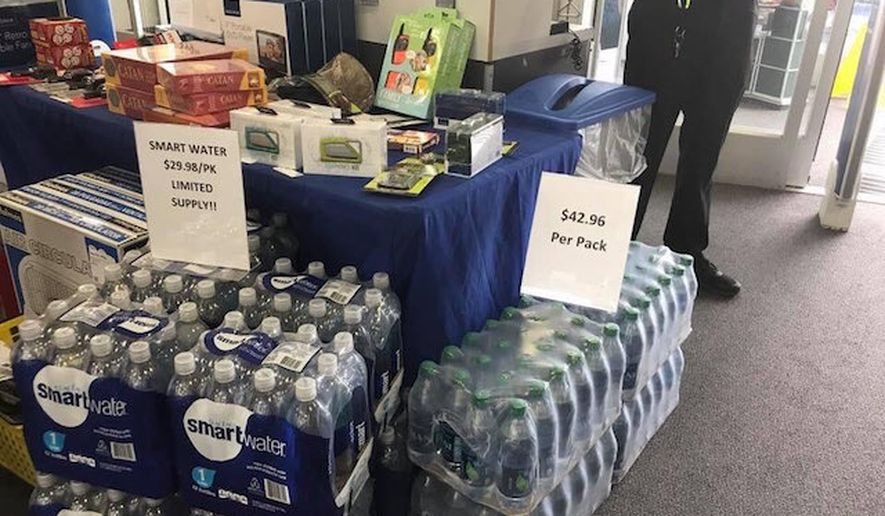 One sad fact is that some people will do anything to look out for themselves. These are the ones that won’t help their fellow man, but are always looking for ways to make their own lives better. After a natural disaster, the very best of humanity is displayed.
Neighbors helping neighbors, strangers saving babies and pets, and everyone banding together to make sure everyone is looked after. Unfortunately, these trying times also bring out the worst in some people. Looting is a problem after events like this, and so is price gouging. In a time when people had lost everything, after Hurricane Harvey earlier this year, people started jacking up the prices of basic necessities. This photo shows one case of water selling for almost $30! The offending seller was Best Buy, and a statement made by the company said it was a mistake because they were not accustomed to selling water. Some doubted the authenticity of this pic, but it’s unfortunately very real. 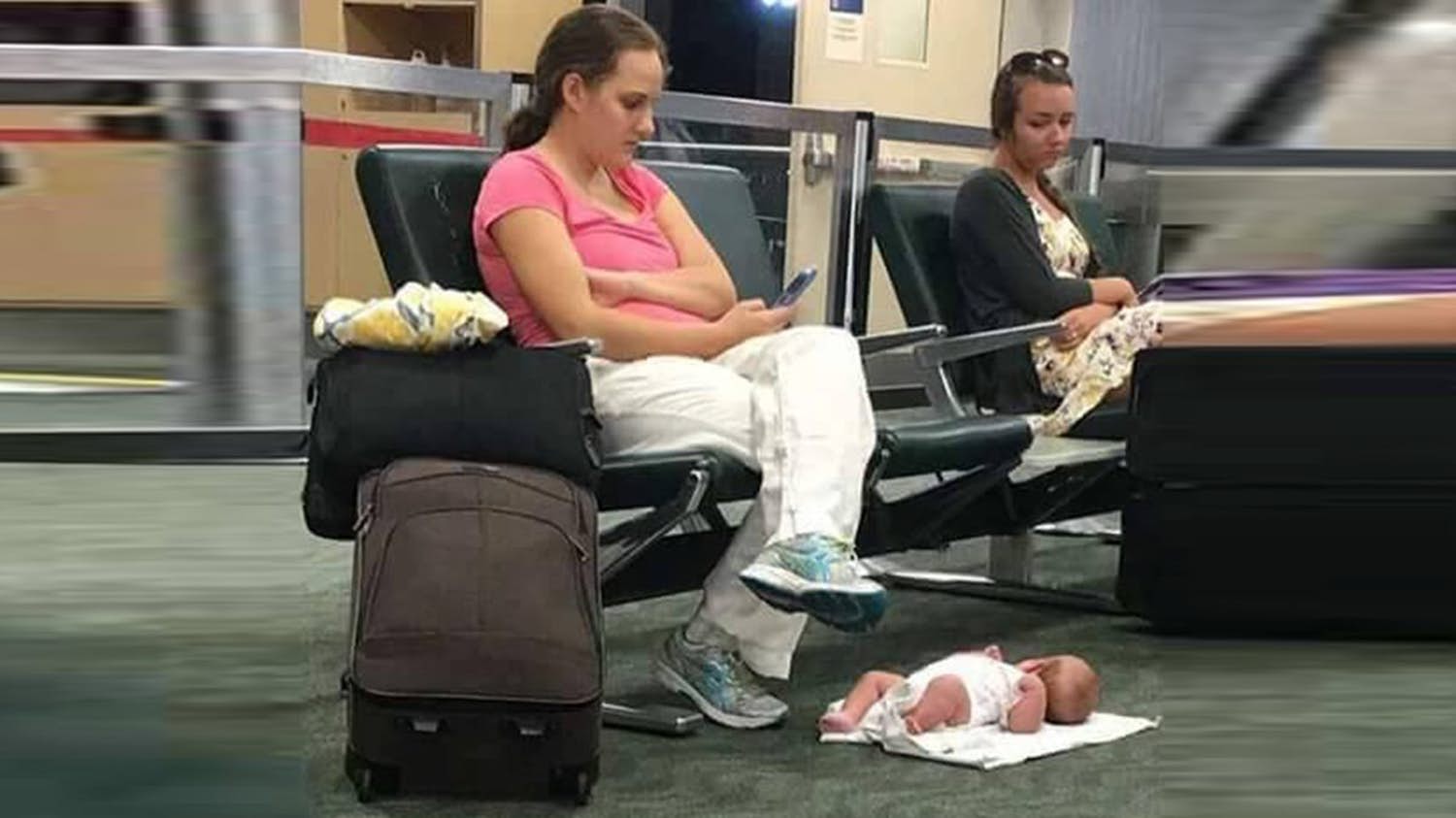 This photo of a baby lying on the floor of an airport went viral earlier this year. Many people attacked this mother for putting her baby in such a position. I mean, who actually places their baby on the floor of such a public place? The photo is real and not nearly as bad as some are making it out to be. The child’s mother, Molly Lensing, was traveling with her daughter who was only two months old at the time.
There had been several delays and cancellations in their plans, and this mom was simply giving her baby a little room to move. She had been cooped up in a seat, or being held all day. Whoever took this photo in an attempt to make her look like an inattentive mother, playing on her phone, and ignoring her baby got it very wrong. We never know the real story about anything we see, do we? 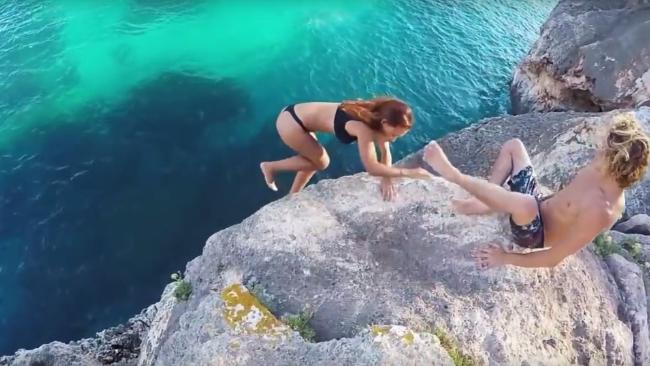 Just seeing this photo of a woman falling from a cliff gives me anxiety. I can promise you one thing, I will never ever be near enough to the edge of a cliff to fall off. Never. Unless I’m running from fire or a bear is chasing me. There are a lot of fake cliff pictures out there, it this isn’t one of them. It actually happened. The woman is ok now, but she did injure her legs and back during this nasty fall.

Mary Shum was on a trip with her now ex husband M Tikhomirov, an amateur filmmaker. It was a true accident where she simply lost her balance and Jay Alvarez, who was on the edge with her, moved in such a way, she went right down. It could have ended up so much worse than it did. I bet she won’t be going near any cliffs again anytime soon. 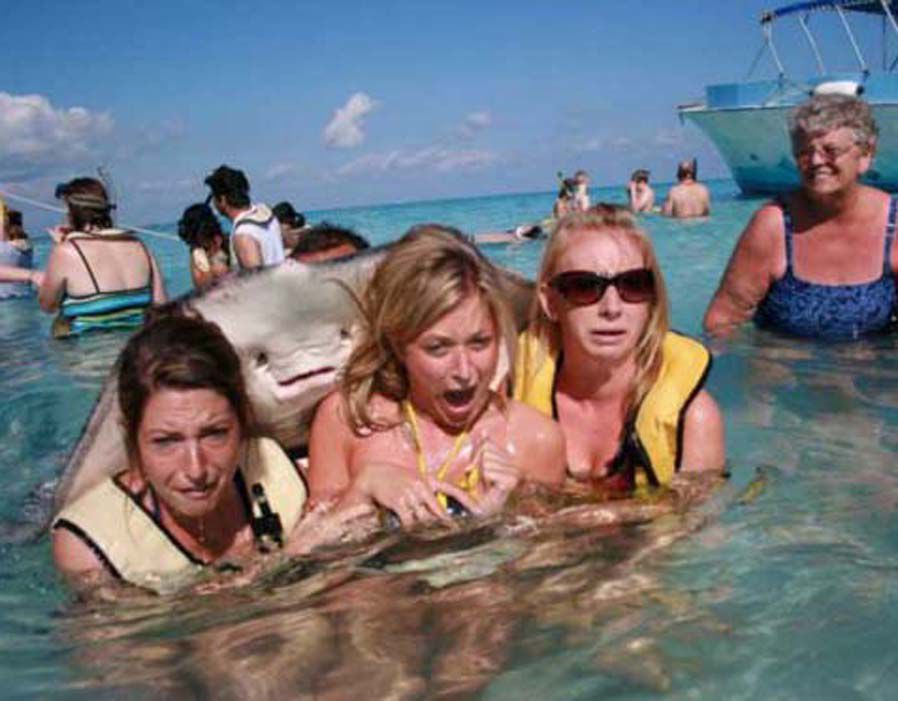 As if I needed another reason to not venture into the sea, this viral photo definitely added one. These three ladies were just having a fun day in the ocean, at Stingray Island, when they decided to snap a cute picture. Though this looks totally crazy and impossible, this stingray was ready for his closeup, too. These vacationing teachers learned their own lesson that day, stingrays are unpredictable! The fear on their faces says it all. They were taken by surprise when they received a hug from this friendly creature of the sea. 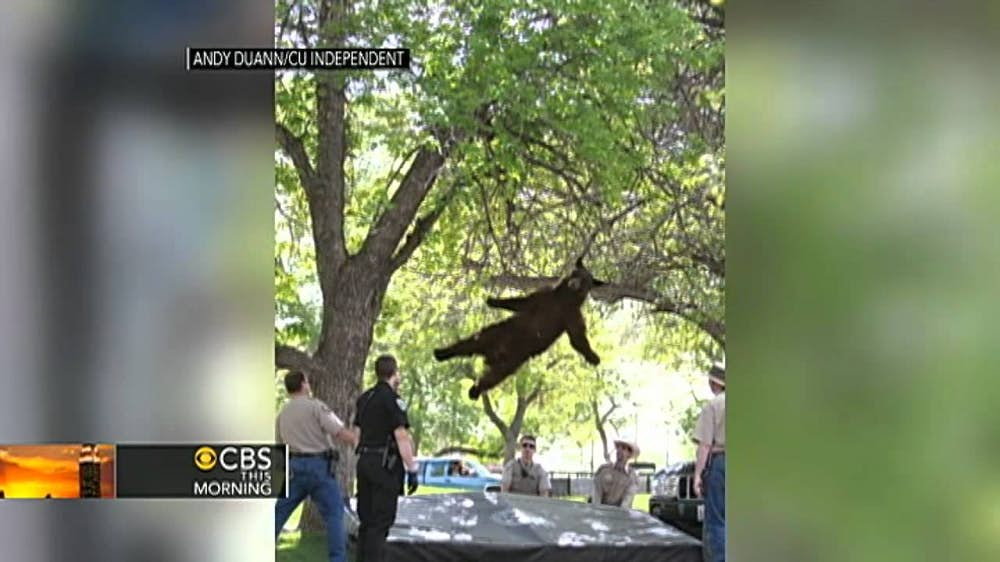 One thing you’d probably never think you’d see in your life is a flying bear. This photo shows just that. No matter how many insist this just can’t be a real image, it absolutely is. This poor bear ended up in a suburban neighborhood and the residents called the authorities. The bear was spooked and ran up a tree to get away. They used tranquilizer darts and he got sleepy and simply fell from the tree. No worries, he wasn’t hurt, as there was a trampoline to catch him. 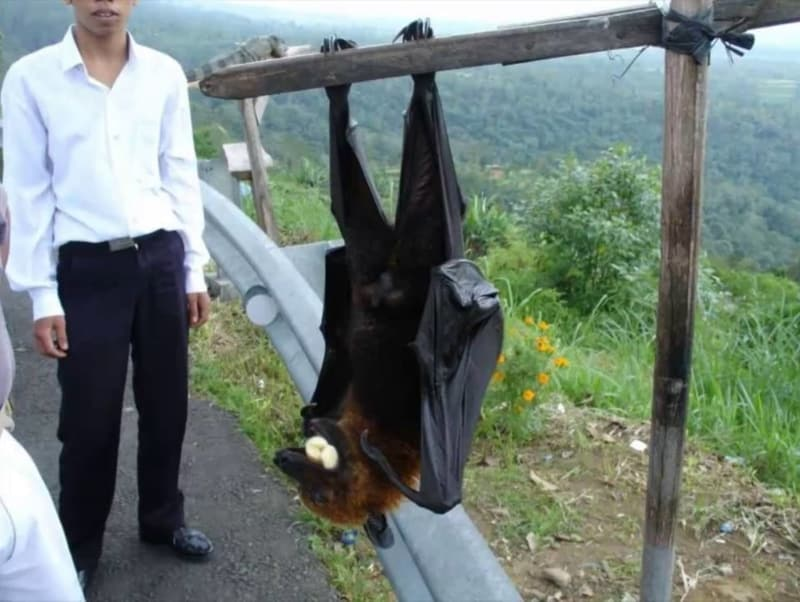 Where I live, we have bats. Cute little bats, no bigger than sparrows. They’re cute. I mean, I don’t want to pet one, but they don’t terrify me. I’m pretty sure if I ran into one of the giant bats in the Philippines, I’d have to change pants.

This picture shows a huge bat who looks almost as big as the man standing beside it. I wish this one was photoshopped! These bats can achieve a wingspan of almost 6 feet. Sadly, they are facing extinction due to deforestation and poaching. 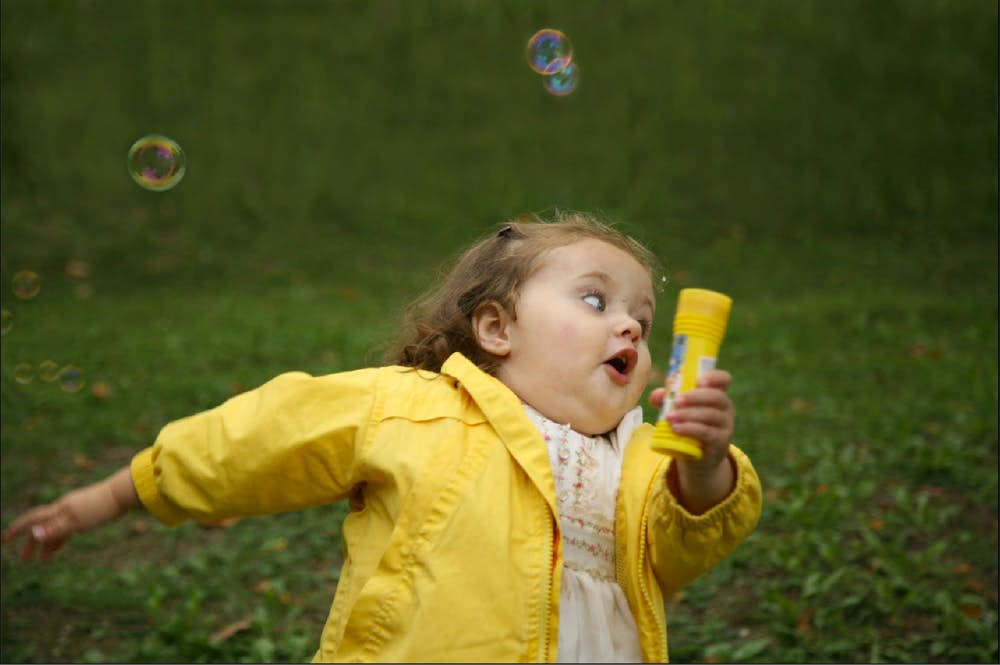 Another famous photo that has made its way into memes from here to Timbuktu is the little girl running through bubbles wearing a yellow rain slicker. The look on her face is hilarious, as if she’s mortified by something and desperately trying to escape. Or is she just having the time of her life with those bubbles? Whatever was really happening, you can’t help but smile when seeing her and her little blond curls. 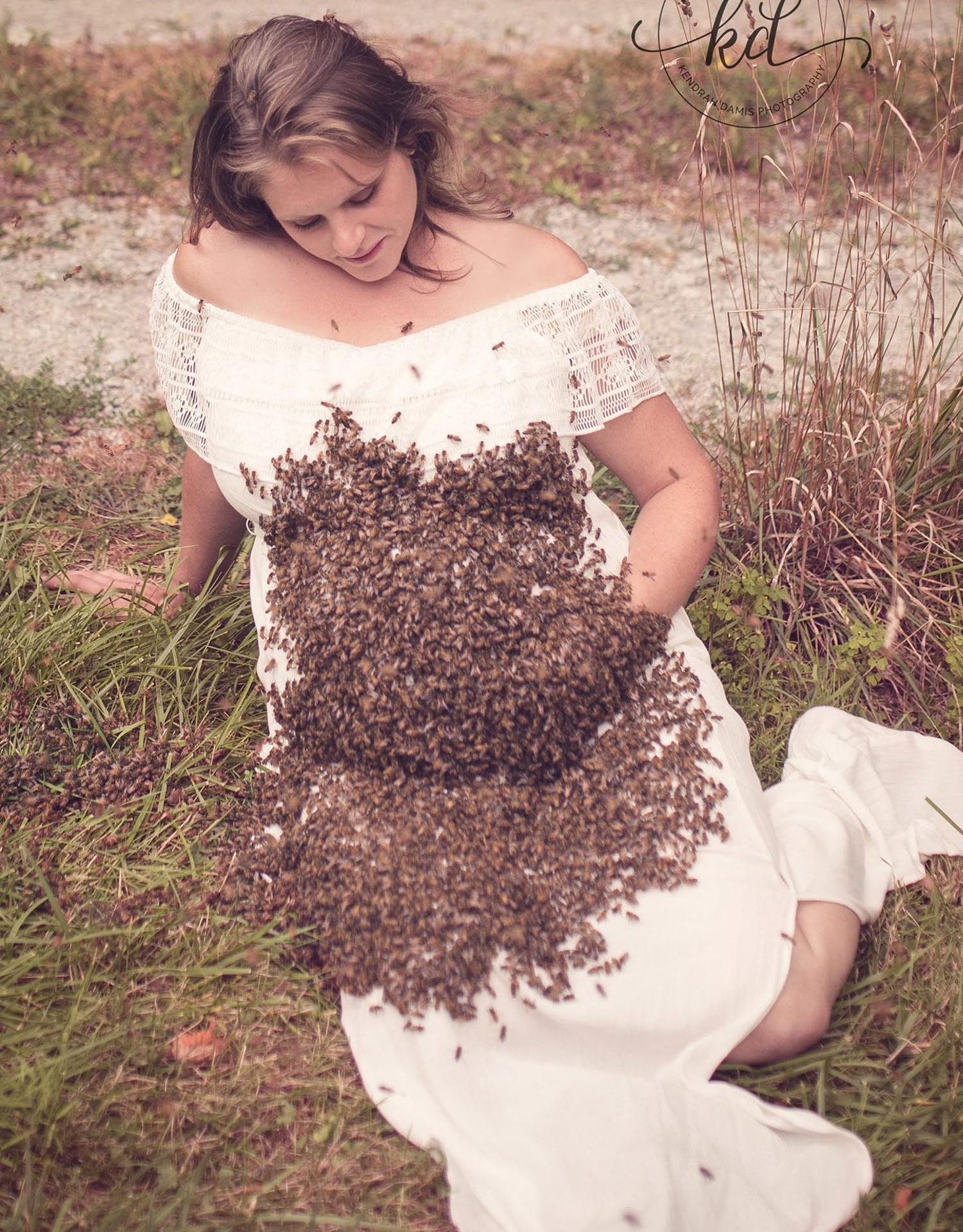 Maternity shoots are known for being sweet and ethereal, but this one was a little different. Most people would not purposefully allow bees to swarm on them, but this expectant Mom did. Her name is Emily Mueller and she’s a beekeeper. That explains the thousands of bees on her belly in the photo. She looks beautiful in it. Tragically, her son was stillborn shortly after the photoshoot.

11. Airplane on the highway 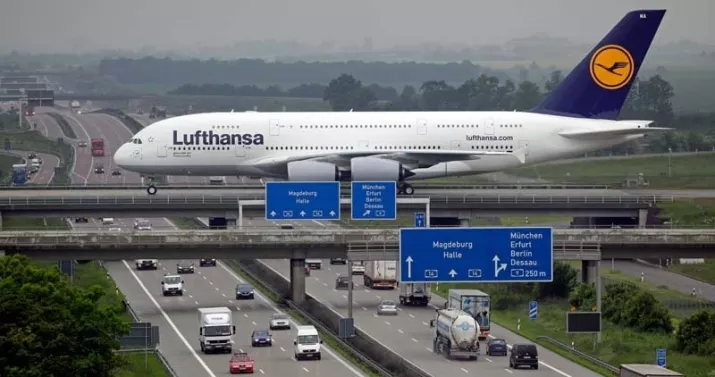 If you have ever lived in a city with a major airport, you have likely been convinced that a plane was about to land on the highway at least once. They come so close to ground level before reaching the airport that they can be seen flying low over the highway all the time. This photo is amazing because it looks as if the plane is actually driving on the road. It’s easy to see why people would think this was a photoshopped picture, but it’s actually a parked plane on an extra space the airport constructed as they needed more space. Makes for a cool picture.

12. Honey, I shrunk the tourist 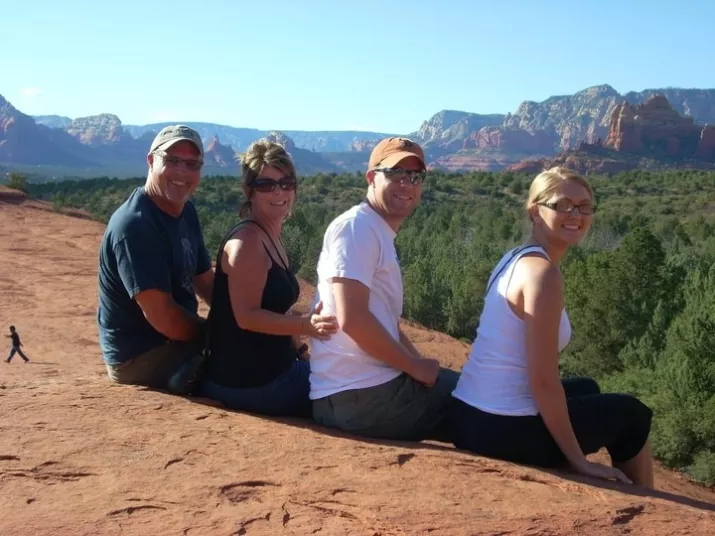 This photo is amazing, and probably the one that I would mow suspected Photoshop if I didn’t know any better. It really depends how angles can cause things to look totally different than real life. This family is simply sharing what looks to be a vacation picture. Off to the left, it appears as if the tiny person is right beside them. Because all of the background looks pretty much the same, and they’re shooting from an angle, The man looks much closer than he really is. I definitely have to do a double take to believe this amazing image was real! 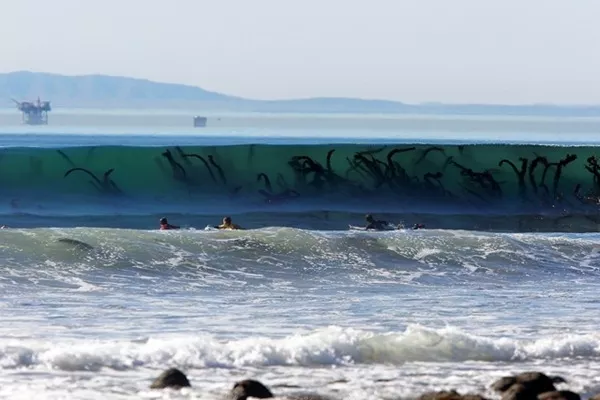 I have seen many pictures of waves in my lifetime, normally the white foam is the prominent feature, but this one is a little bit different. Snapped at just the right moment, it looks as if there are sea creatures in the wave. Perhaps giant octopuses waiting to attack! No, it is simply largemouth of seaweed making their way to shore, riding waves on in.

I love finding interesting photos like this that seem fake, but are absolutely real. Enjoy!