This 8th grader is facing felony charges for cybercrime, because he changed his teacher’s desktop background.

If you’ve ever messed around with your teacher’s computer at school, you know how bad the consequences can get. This particular boy learned it the hard way after he decided to change the background on his teacher’s desktop and is now being treated as a cybercriminal because of it. 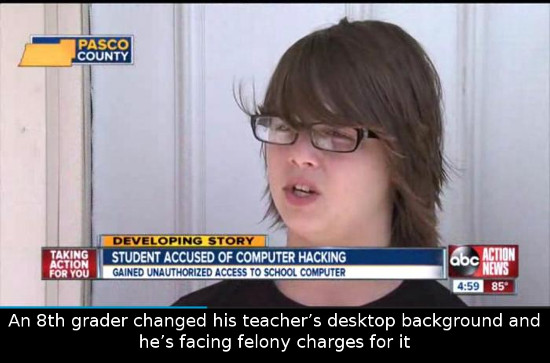 Meet Domanik Green, a 14 year old 8th grader, who is now being charged with felony offense as well as unauthorized access. As it turns out, the 14 year old boy learned the admin password for the Paul R. Smith Middle School a couple of years ago and had decided to play a small prank for April’s Fools Day on one of the teachers. The boy, who lives in Holiday, Florida, US, changed the teacher’s desktop background on the 31st of March this year and hoped his teacher would see the prank. However, a substitute teacher saw the new desktop and decided to report the change.

Shortly after that Green was arrested and convicted as a full-time cybercriminal. The boy also got suspended from school for 10 days. His mom, Eileen, told the media that her son doesn’t deserve to be treated as a criminal. Since the kid had the network password, he could have changed every single one of his grades from the system, could have accessed tons of files and could have done lots of damage. However, he only pranked a teacher he didn’t really like. Unfortunately, that didn’t stop the school’s officials from seeing him as a potential threat to the school and the network system, because he had illegally broken into the network.

According to the 8th grader’s own words, he had no idea that it was illegal to do such things. He claims that if he knew it was against the law, he shouldn’t have done it.