Home » Did you know that A teenager stole $25,000 from his own grandfather and…

An American teenager stole $25,000 from his own grandfather and gave the money away to his classmates.
When kids steal money, it’s usually because their parents refuse to buy them something stupid, or simply because they feel like doing something mean out of revenge. This particular teenager, however, stole $25,000 from his own flesh and blood and gave thousands away to his classmates. 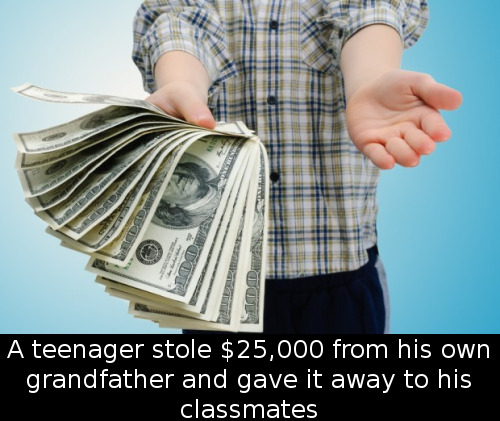 The unnamed kid was identified as a 13 year old boy from Medina, Ohio, US. The kid had managed to steal thousands from his grandfather’s money over his spring break. The official reports state that it’s unclear how the boy managed to get his hands on such an amount of money or why he decided to steal exactly from his own 83 year old grandfather. The reports, however, show where the money went to, or least a big portion of it.

The boy allegedly started giving away banknotes of $100 to some of his classmates and blew up several thousand on these monetary “gifts”. Around $7,000 of the total amount of the stolen money were found over the course of several days. The rest, however, remains missing. The Medina Police Department is currently running a wide investigation in order to trace the missing money and to catch the people, who were involved. As it turns out, the police are questioning not only the teenager’s classmates, but also the kids’ legal guardians as well as associates. The cops believe a big portion of the stolen money has already been spent – not only by the boy, but also by his classmates.

Strangely enough, it’s still unclear if the teenager’s grandfather will press charges against his grandson and the kids the boy gave his money to.