A bunch of Japanese scientists have actually created a technology, which allows them to put human thoughts on a screen.

Have you ever wondered what your thoughts might look like? Sure, you can imagine things and you envision things when you think about them. But have you really thought about what your thoughts would look like if there existed a technology, which could put them on screen? Well, you don’t have to wonder, because such technology actually already exists thanks to a team of Japanese scientists. 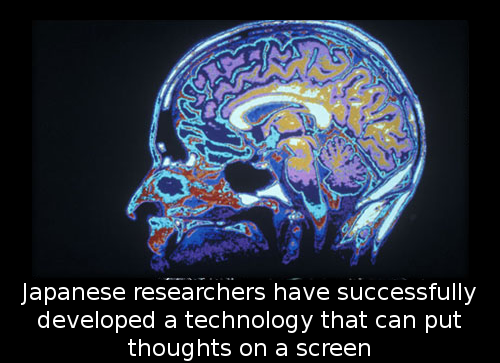 The scientists at the ATR Computational Neuroscience Laboratories came up with the technology a few years ago. Before them nobody had ever managed to put thoughts to screen, but their system, which is based on our brains’ visual cortex, worked. The high-tech sensors they used connected with electrical signals, which were sent from the test subjects’ retinas to their visual cortex. The visual cortex is actually responsible for transmitting an image we have seen with our eyes to our brains, so when the scientists caught those signals, they managed to put them on screen.

Their high-tech system worked on a simple trained imagery base and managed to produce a visual of the test subjects’ thoughts. Basically, by connecting to the brain’s visual cortex the system brought an actual colored portrayal of a person’s thoughts on the screen. Shortly after the Japanese scientists spoke out loud about their ground-breaking technology, they stated that further research had to be done in order for the system to produce more diverse imagery and to actually portray other more complex thoughts and even imagery from dreams.
According to the scientists, their creation could be a possible helping hand for lie-detectors, as well as for psychology and psychiatry.