At the age of 7, along with some friends, Vin Diesel broke in and vandalised a theater in New York. The artistic director chose instead of calling the police, to see how they’d do in the upcoming show, and gave them scripts. This was Vin Diesel’s debut in the acting world. 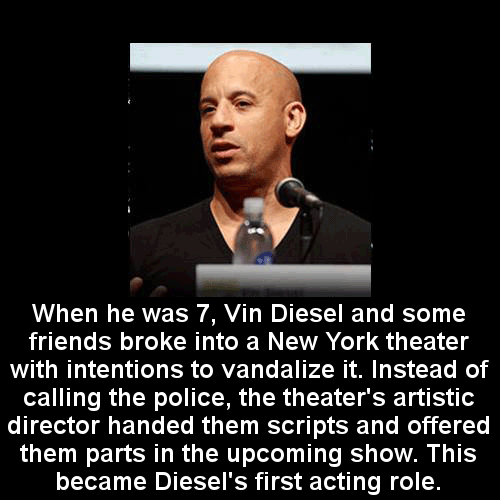 When he was just seven years old, himself, and his friends went to a Theater in New York, with the full intention of breaking in, and vandalizing the place. However, this ended very differently when after they’d broken in, the artistic director gave them a deal. He wouldn’t call the police, if they would take a role in the production. This was where Vin Diesel was set to remain for his teenage years, before going to Hunter College, which was the start of his screenwriting career.

Of course, since his first role in that play ‘Dinosaur Door’, he has also had many other appearances in films, writing, directing, producing and starring in a single film, ‘Multi-Facial’, as well as doing those in other productions.