At some point in your life, you’ve probably heard of Muhammad Ali, with his brilliant boxing skills, but he has also done other great things in his life!

One of these being ‘acting like a superhero’, when a very distraught man was threatening to kill himself. 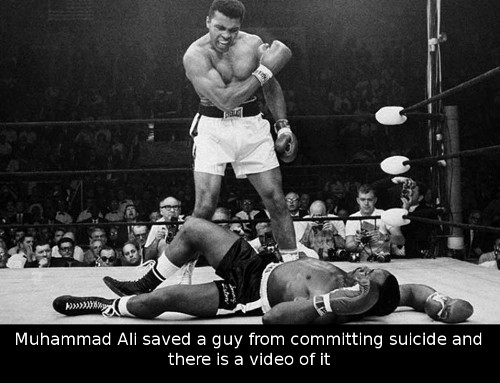 A hooded man was on a ledge, nine floors up, and had shouted down


Emergency services, as well as a Minister, had all tried themselves to help this man and to bring him down safely, but they’d pretty much given up on this man. Former heavyweight champion, Muhammad Ali, said that he’d talk to this man, on a window just by him. It’s said that he yelled

I’m your brother. I wanna help you.

After recognising Muhammad Ali for who he was, the man decided that he would talk with Muhammad Ali, and chat with him. It took a hair raising twenty minutes for Ali to be able to try and talk this man down, although it looked like it would be to no success. Eventually, weeping, the man decided to come down, and was admitted to a psychiatric hospital, where Ali said that he would visit him shortly.