Do you know how Arnold Schwarzenegger won the Mr. Olympia title in 1970 against Sergio Oliva? Here’s a hint: he cheated! 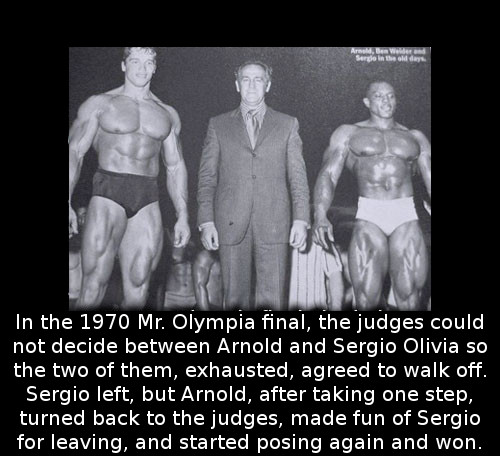 Back in 1969 Arnold entered the competition, but lost the title to Sergio Oliva, another prominent bodybuilder. Schwarzenegger was then in his early 20s and he spent a whole year studying Sergio’s poses and techniques in order to beat him in the competition in 1970. However, during the competition Schwarzenegger realized he wasn’t going to beat Sergio in any possible way – even by using the knowledge he had gained about his opponent’s posing techniques. When the jury chose Sergio and Arnold as finalists and made them compete against each other in an intense pose-down that took several minutes. Arnold was ready to give up, so he motioned to Sergio to just quit and walk off the stage. Sergio agreed to it, stopped posing and started walking.

Schwarzenegger then resumed posing again and won over the judges. He tricked Sergio into quitting and moments after that he was actually awarded with the title Mr. Olympia for 1970. He is still the youngest Mr. Olympia up to date, because he was only 23 years old when he won the competition!
Along with the Mr. Olympia for 1970 title, Schwarzenegger also won several other competitions at an extremely young age. He became Mr. Universe when he was still 20 years old and he actually repeatedly won the Mr. Olympia title – a total of 7 times!