This teenage girl had plastic surgery just so she could win back her ex-boyfriend.
You can become famous on social media and on the Internet for all sorts of things – most of which, of course, are absolutely ridiculous – from accidentally setting yourself on fire to flunking an exam big time. This particular teenager, however, became an Internet star after she decided to undergo plastic surgery just to win her ex-boyfriend back. 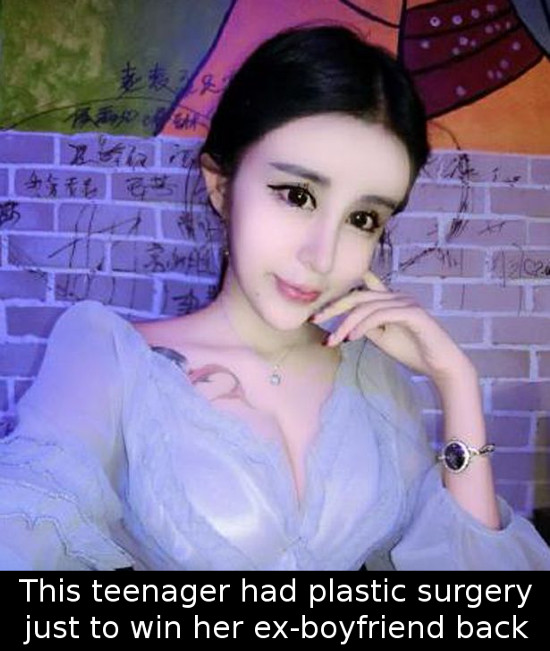 Meet Lee Hee Danae – the new 15 year old Internet sensation. Lee Hee was born back in May 1999 – at least that’s what her social media accounts are claiming. The girl became a star overnight after she started posting pictures of herself on Weibo – the Chinese social networking equivalent of Facebook. She currently has nearly 320,000 followers on Weibo and she’s making headlines all across the world. The 15 year old teenager’s looks are the most striking part about her. Her enormous eyes and enhanced facial and body features are anything, but normal, and by the looks of it – people on Weibo are digging it. The teen’s doll -like looks have transformed her into an Internet sensation.

What’s even more shocking than her appearances is the fact that she allegedly opted for this look in order to win back her ex-boyfriend, as well as the fact that she even underwent plastic surgery at this fragile age. Of course, some skeptics claim that the teenager didn’t go under the knife. They believe she digitally enhances her looks before she uploads her pictures on the social media. Some of her followers claim that she looks like a doll, while others simply describe her as “too beautiful to look at”.
It’s unclear if Lee Hee really is 15, if she’s really had plastic surgery and if she got back with that ex-boyfriend.