Sammy Griner, who’s also known for the massively popular meme known as ‘Success Kid’ has brought laughter and amusement to many of us who use Facebook or anything else which involves memes. Perhaps one of the longest going memes, you’ve most likely seen it, with his fist clenched. 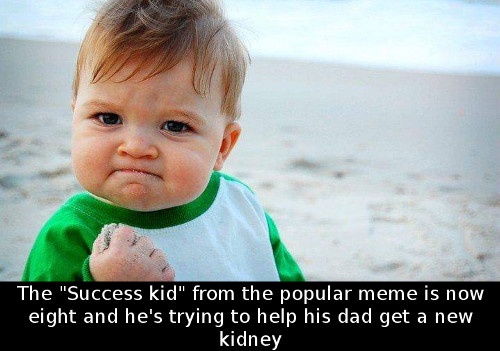 However, after all this time of amusement, he is now asking us to give something back to him – he would like funding for his father’s treatment, and for someone to donate a kidney.

Justin’s wife Laney, has said that it would be a brilliant way to boost funding as if people knew it was the father if the baby that everyone had seen and laughed at, they may donate! With a GoFundMe page set up, she’s outlined a target of $75,000 to fund pre-treatment as well as getting a kidney for her husband.

With his current kidney, Justin must be on a dialysis machine for 12 hours every week, whilst his family are still searching.

We’ve had several friends and family offer and get tested to be donors, but no match so far. We certainly prefer a living donor because the prognosis seems to be much better.