The owner of a missing dog, who’s residing in Washington, D.C., US, can face the hefty fine of $750,000 just for putting up posters of his beloved missing pet on the streets of Washington.

Roger Horowitz and his wife Annemarie adopted a dog named Ollie after the poor pooch was being treated extremely badly by his former owners. The timid doggie was out on a walk with his new owners in Washington when he got scared by a nearby car, which had backfired. Ollie pulled away from his owners along with his leash and quickly ran out of sight. The devastated owners didn’t know what else to do, but to ask the citizens of Washington for help. 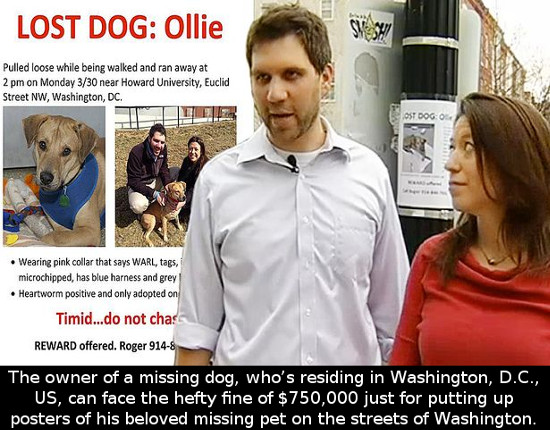 Roger and Annemarie made posters with a couple of shots of Ollie, one of which was up close, wrote down essential information about their missing pet and hired a bunch of people to help them put the posters up on the streets of Washington. Unfortunately, shortly after putting up the posters, Roger was contacted by the local police. They told him that he can face a $750,000 fine for putting up the posters if he didn’t take them down. At first Roger couldn’t believe it, but he then took down the posters. The original poster is still on the web – it has a thorough description of Ollie, his traits and the area where he initially got lost. The info also states that the dog had been with the Horowitz family for a single week only before he got lost.

The Washington government has a law, which forbids people from “illegally” putting up any sorts of posters. The fine for such actions is $300. According to official reports, the threat of a $750,000 fine could be a result of the total amount of posters Mr. Horowitz and his friends and family put up. Fortunately for him, his story is currently trending on Twitter with the hashtag #FindOllie and people are searching for the missing pet.