The Idaho police burst a young kid’s bubble after he was caught stealing a pack of chewing gum.
According to official reports, an arrest warrant was issued for an unnamed 9 year old boy from Post Falls, Idaho, earlier this January. 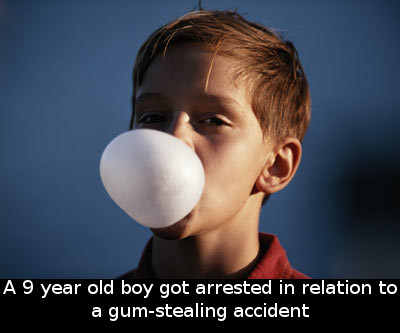 The boy in question stole a pack of chewing gum from a local store and had to appear in court to see a judge and take responsibility for his crime. However, the boy’s parents failed to get him to court on the set date, which complicated his situation. The police in Post Falls received notice that the boy had failed to appear at court, so they had to issue an arrest warrant. Scott Haug, one of the policemen, commented on the case and described it as something extremely strange and unnatural. He stated that he had never seen a situation involving a minor get so out of hand for such an innocent crime. The attorney who issued the warrant couldn’t comment on the case, but Mr. Haug stated that it was issued as the boy had missed a court date for the second time.
The 9 year old is currently detained at a local juvenile detention center and is waiting to appear before a judge.