Home » Advertisment A grandpa tried to fix a computer using a hairdryer, because he was told the computer was “frozen”

When your computer freezes things get ugly – you start swearing, yelling and occasionally, throwing things across the room. Well, forget about all of that, because this grandpa has come up with an innovative solution for your frozen computer. 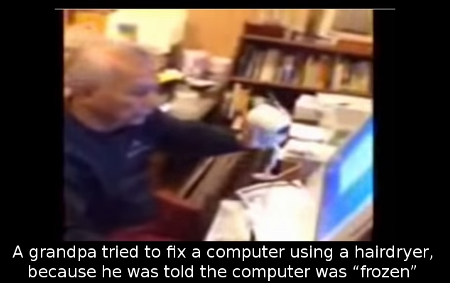 Earlier this January one Snapchat user uploaded a short video on the web of his grandfather trying to fix a broken desk computer. Once the guy was told that the device had frozen, he simply decided to fix it by warming it up – with a hairdryer! That’s right; the grandpa tries to unfreeze the computer by blasting the dryer at full strength at the screen. The video, which is just under 10 seconds long, has been uploaded to numerous websites, including YouTube. The clip has already reached nearly 50,000 views on YouTube over the course of a single week!

However, some Internet users are speculating over the possibility that the whole thing might be a set-up, since it’s highly doubtful that any person would try to unfreeze a “frozen” computer by heating it up. Of course, it could also be a real-life situation, in which an elder man with no computer skills is trying to fix a problem he has never come across before.