If you’re one of those people who think that VR headsets are a piece of junk and a waste of money, you will definitely change your point of view after seeing this video. 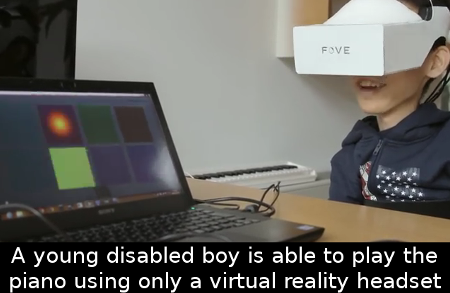 During a Christmas concert in 2014, young children from the Special Needs Education School for the Physically Challenged performed before the eyes of amazed parents, teachers and reporters. One of the kids, a young boy from Tsukuba, Japan, played a melody on a classical Yamaha piano without even touching the keys. The disabled kid was wearing a virtual reality headset, which allowed him to play the melody by blinking at the changing notes and tones. The headset then sent signals to the piano via a Wi-Fi connection, allowing the boy to produce a melody on the instrument. The VR headset, which the kid was wearing, is the result of collaboration between the University of Tsukuba and the popular Japan-based tech manufacturer Fove.

The boy practiced for four months on the device before playing his part at the concert, which took place in December 2014.
Fove is currently trying to raise 1.5 million yen (around $12,800 in USD) in order to equip 135 schools with the same device.