Is this woman a fraud or is she just extremely lucky?
Joan R. Ginther, a Texan woman in her early 60s, has got to be one of the luckiest people on the planet. She won the Texas lottery a total of 4 times and earned nearly $21 million out of it. 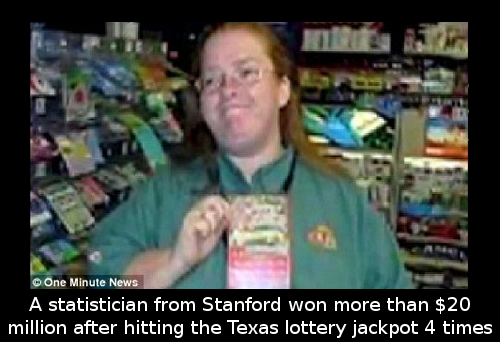 Her very first big win was $5.4 million. Nearly a decade after that Joan won another $2 million from the very same lottery. Her luck didn’t stop there and just a couple of years after her last win she scored $3 million. With a total of $10.4 million you would think that Joan would have used up her luck, but she went on to score a whopping $10 million from the Texas lottery back in 2010. Considered to be the luckiest person in Texas, Joan was the center of media attention for quite a while. One of Harper’s Rich and a professor teaching Gambling and Commercial Gaming at the University of Nevada, Joan’s PhD in statistics and math from Stanford University has somehow helped her figure out the algorithm behind the placement of the winning scratch-off tickets that earned her nearly $21 million. Since she bought all four of the winning tickets, Rich believes that she cheated the system with the help of her brain and several sources working within the lottery.
However, Texas lottery officials state that Joan’s score was nothing more than pure luck.