Come to the dark side. We might not have cookies, but we can save your life.Scott Loxley, a 47 year old Sci-Fi fan, set off from Melbourne in 2013 on a charity walk around Australia. He hopes to finish the 15,000 km walk by the end of June 2015. 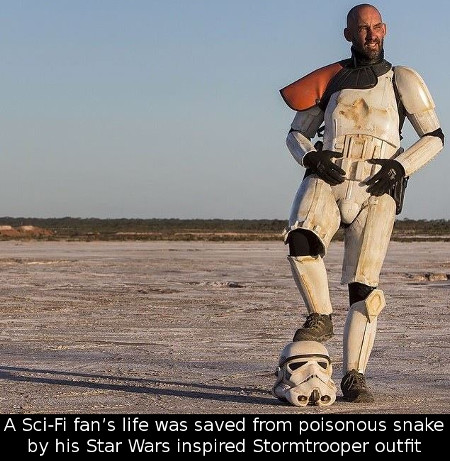 Unfortunately, he seems to be having some trouble with the country’s wildlife. Scott had a close encounter with a terrifying 18 foot long crocodile and just recently he had a near death experience with a poisonous snake. Scott was walking across Queensland in a Stormtrooper suit made out of plastic, when he spotted something that seemed like a dead snake. It turned out that the snake, which was a King Brown snake, was very much alive and vicious. It launched itself towards the man and tried to bite his shin. Fortunately, Scott’s suit saved his life. The snake’s teeth didn’t manage to go all the way through the thick plastic of the Star Wars inspired outfit.
Scott is just one of the many members of the 501st Legion – an international non-profit movement helping different charity organizations. The members do Star Wars cosplays and donate the profits to a variety of charities.