Some of the greatest mysteries in our world are the ancient Egyptian pyramids. We know they were built to serve as tombs and temples, but nobody knows for sure how exactly the ancient Egyptians managed to raise these glorious structures up without having the architectural and scientific knowledge we have nowadays. 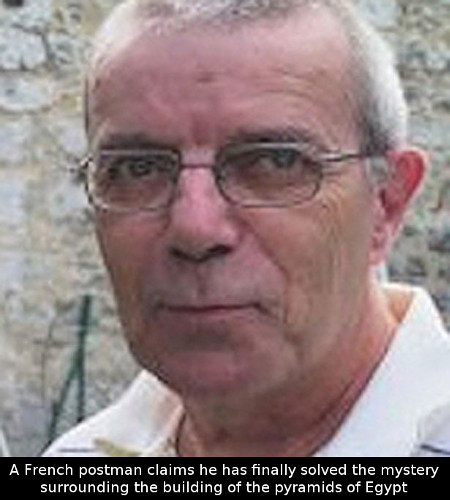 Well, one retired postman believes he knows the answer. Norman Michel saw Land of the Pharaohs back in the early 1970s. It puzzled him how the Egyptians succeeded in building such large and imposing structures that would last thousands of years. He, like many others before him, started thinking about the building process. Norman became so fascinated that he devoted the following 40 years of his life to studying pyramids, construction and Ancient Egypt. Now he believes he has the answer to the question tons of historians and scientists have been asking. According to Norman, the Egyptians used sets of ramps. Norman claims that they were robust, simple and economical. He is convinced the Egyptians used ramps to move the stone blocks and that they also incorporated the ramps into the structure, which is the reason pyramids are so smooth from the outside.

Other popular theories claim that aliens built the pyramids or that the Egyptians constructed them from the inside out.