On the 2nd of July 1916 Hans-Ulrich Rudel was born – a man who would later go down in history as the only person to receive the highest military award an average soldier could ever receive. 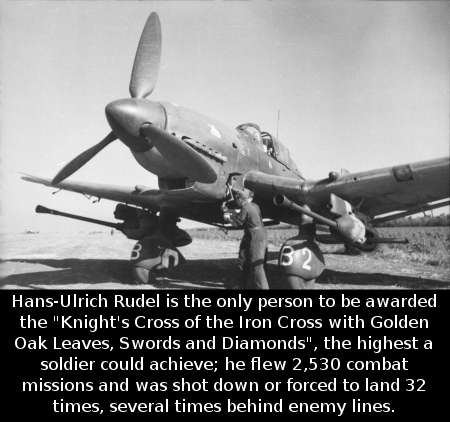 Hans-Ulrich enrolled in the German air force shortly after receiving his high school diploma. He was trained in a variety of military camps before becoming a full-time pilot and Second Lieutenant. During World War II he managed to successfully destroy 2,000 targets such as military vehicles, cruisers, tanks, aircrafts and even a battleship. He flew a total of 2,530 combat missions and was shot down by artilleries and forced to land a total of 32 times, sometimes behind enemy lines. He was awarded the Knight’s Cross of the Iron Cross with Golden Oak Leaves, Swords and Diamonds. The only award higher than this is the Knight’s Cross of the Iron Cross, but since it’s awarded only to senior commanders, Hans-Ulrich’s award is the highest possible award the average soldier can ever hope to attain.

He received a total of 15 awards. He published a military journal, became a businessman and remained an active sportsman even after the war.