A British mother of three from Liverpool, UK, was so scared of varicose veins that she went as far as asking her doctor to amputate her legs, although they were perfectly healthy. 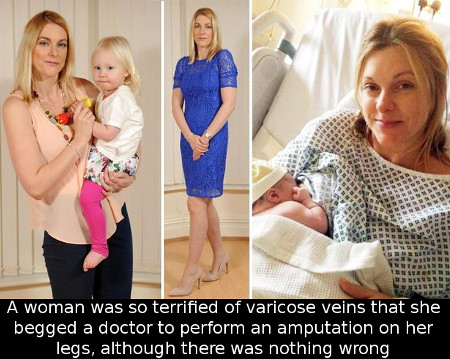 Claire Jones, a 39 year old Brit working as a bank cashier, developed severe venephobia at an early childhood age. She was so scared by the sight of her mother’s varicose veins that her mom was forced to wear pants and hide her legs from her young daughter. As Claire got older, her fear only grew stronger. She was extremely careful with her own legs, but she still developed varicose veins a couple of years ago. Her fear caused her to beg her doctor to amputate her limbs in order not to see the deformed veins.

She experienced panic attacks each time she looked down at her legs and she thought she would lead a better life in a wheel chair. Fortunately, her doc didn’t amputate her limbs and offered to remove her varicose veins. Unfortunately, after Claire bore her youngest two children, the varicose veins returned.
The mother of three is now going to therapy in order to overcome her fear.