2015 kicks off for Justin Bieber with a huge Calvin Klein ad. The 20 year old pop star is shown topless in the new advert for the luxurious men’s underwear. The Canadian worked alongside Dutch model Lara Stone and the famous fashion photographer Mert Alas. 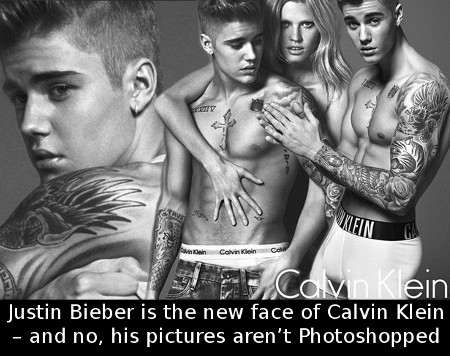 Unfortunately, Bieber’s campaign almost went down in flames when a series of websites posted before/after photographs of the advert, which appear to show that Bieber’s pictures have been heavily Photoshopped. An unnamed source allegedly sent the unretouched images and the Internet went crazy over the fact that the final photographs portray Bieber with enhanced hips, biceps, back muscles and other parts of his body.

However, the pop singer’s team allegedly threatened to sue the source of the before/after images, and the website which originally posted them took them down. Not only that, but the site also got in touch with Bieber’s trainer, who stated that the 20 year old does work out hard and has a well-endowed physique. Bieber himself also stated that he works out with his trainer 5 days a week and tries to eat healthy food most of the time.