There’s no doubt that our brains are the most mysterious organs in our bodies. Many theories state that we don’t even use half of our brains’ potential. One woman’s story might just confirm this theory. 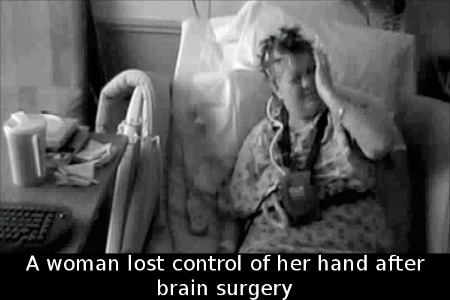 Before Karen Bryne had brain surgery, she suffered from epilepsy. In order to treat her disorder she underwent surgery which changed her life forever. During the procedure Karen’s surgeons cut her corpus collosum (the fibers which connected the two sides of the woman’s brain). Although the surgery succeeded in curing the woman of her epilepsy, it caused another severe problem – she lost control over one of her hands. After the link between Karen’s left and right brain was severed, the two sides started struggling to control her body. Unfortunately, her brain registered the behavior of only one of the sides, thus, she didn’t have any control of the receptors, which controlled her “alien” hand.
This caused Karen incredible difficulties, since her hand was doing everything on its own – from undressing her to misplacing valuable stuff from her purse and even to slapping her! Fortunately, Karen is now receiving medication which is helping to suppress her condition.