It’s still January, but his man might as well become the worst father of the year after his 7 year old son was caught on camera driving his father home on a busy road at nighttime. 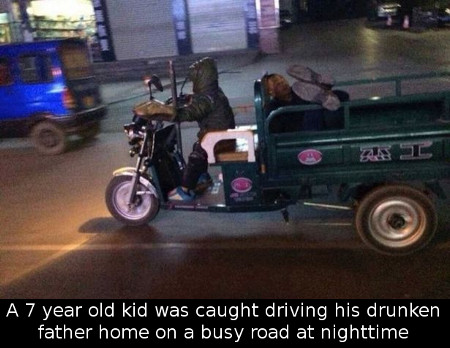 Earlier this January news of an irresponsible parent’s actions surfaced on the Internet. A young Chinese boy was caught on pictures driving his drunken dad home on the back of a tricycle through the streets of Yizhou, China. The pictures show the kid driving while wearing slippers and navigating through the busy nighttime roads. As official reports state, the boy’s father got drunk and the kid had to make a trip from his home to his father’s location and then back to their home. The child drove for a total of 12 miles and managed to somehow navigate through the traffic. The reports claim that he drove with admirable “skill and composure” with his drunken passed out parent.
The snapshots of the boy and his reckless parent immediately went viral on the web and many users have complained that the boy’s father has to be punished for his irresponsibility. Other users are just glad that the boy managed to pull off the stunt without causing any accidents.