Several years ago, when Selena Gomez and her band were working on their album A Year without Rain, Katy Petty was also working on her album Teenage Dream. Rock God, a song which Perry had written for the album, ended up not making the cut for Teenage Dream 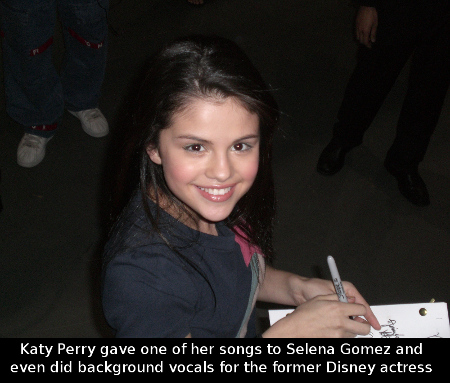 At that time Gomez and Perry shared the same music agent, so the former Disney princess learned that Rock God wasn’t going to make it to the album. Although Gomez herself stated that she was a big fan of Perry’s and that she had talked to her in person before, she didn’t have the guts to ask Perry to give her the song. Fortunately, their manager managed to convince Perry to give the song away. Katy was not only willing to do so, but she also lent Gomez her voice by singing the background vocals on the track.

The original Rock God lyrics were written by Perry as a metaphor to how she was choosing music over her religion. At that time she was still letting go of Christian music and was breaking into the pop music industry. Gomez told MTV that she loved Perry’s style, but she was obliged to change the song in order to make it sound more Selena and less Katy.