An unnamed young man was caught at the Chinese border earlier this January trying to smuggle nearly 100 iPhones into the country. 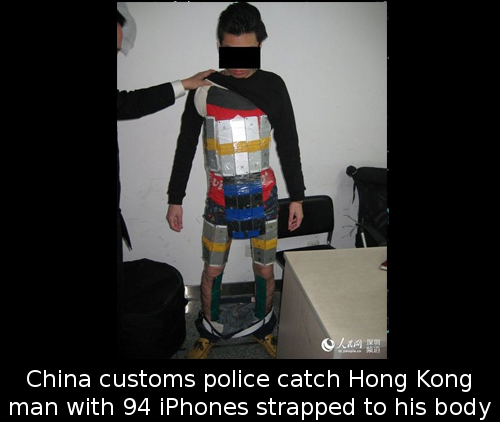 The man, whose identity remains a secret, had strapped a total of 94 iPhone 6 and iPhone 6 Plus devices to his body with the help of duct tape and plastic bags. He had covered the items with his clothing, but the border officials spotted his strange gait as he walked and the visible tension and stiffness in his muscles, which looked extremely suspicious. Shortly after frisking him the officials found the “armor” of smartphones underneath his clothes. The smuggler was detained and the smartphones were seized by border officials. The man was identified as a citizen of Hong Kong, China, but his face remains hidden in the official reports.
The iPhone 6 and the iPhone 6 Plus are already on sale in China, although many smugglers prefer to transfer stolen prototypes of the smartphones into Asia. According to official reports, the tactic used by this man is frequently practiced in the smuggling community.