Cockroaches are nasty – they can survive a nuclear war, they carry all sorts of diseases and they look absolutely terrifying. So it’s only natural that you would try your best to kill a cockroach when you see one. Unfortunately, this particular woman’s best attempts resulted in her blowing up an entire toilet. 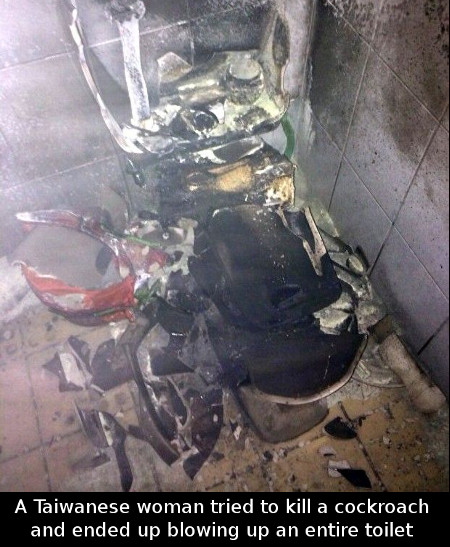 According to official reports, an unnamed Taiwanese woman from a local cleaning company was sanitizing a toilet at an office building in the city of Taoyuan located in northwestern Taiwan, when things got out of hand. She saw a cockroach while she was cleaning and decided to smash the insect with her shoe. However, she couldn’t be sure that the roach had died, so she wrapped it in a tissue paper and then hit it some more. Just to be on the safe side in case the creature was immortal, the woman then lit the tissue on fire and dumped it in the toilet. Unfortunately, she had forgotten that the toilet had just been cleaned with highly flammable detergents. The toilet exploded, obliterating all traces of the cockroach.
Fortunately, the woman and the people working in the building were uninjured. Unfortunately, the toilet could not be saved and neither could the cockroach.