This website is taking online dating to a whole new level.Several years ago a “recovering lawyer” and entrepreneur Matthew Homann purchased the domain invisiblegirlfriend.com for the small fee of $7. He built up an “invisible” dating website, which is now in its Beta testing phase. Invisible Girlfriend offers something which other dating websites don’t – a girlfriend who doesn’t really exist. 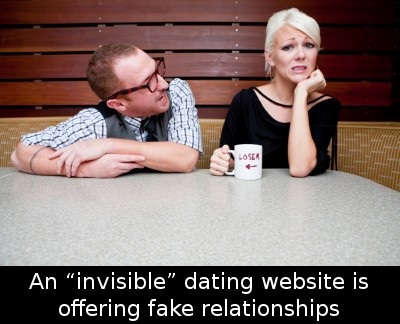 Imagine having to lie to your family about having a girlfriend when you don’t, or being a lonely soldier who has to convince his team that he has a partner waiting for him at home. Instead of asking one of your friends to pretend to be your partner, you can actually get a more convincing girlfriend for only $25 a month. The subscription gets you handwritten letters, phone calls and up to 100 texts from your partner. You can give your girlfriend a name, choose what she looks like, decide what her age is and make up the story of how the two of you met.
The actual people who pose as girlfriends, send texts and give you calls are strangers who are paid for their services. According to Homann, the website is ideal for anybody who wishes to have a fake girlfriend only to shut his family/friends/colleagues up.