The only person you would imagine would want your name tattooed on them would probably be your significant other or some extremely close relative. However, this particular woman doesn’t mind inking strangers’ names all over her body. 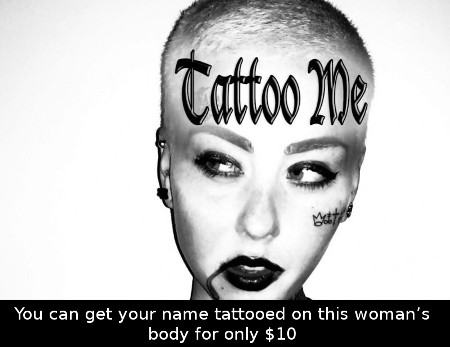 Meet Illma Gore – an ink addict from California, US. Gore is only 22 years old, but she already has 47 tattoos all over her body. Not only that, but she apparently can’t decide what else to engrave into her skin, because she has started one of the strangest crowdfunding campaigns of all times. The woman has set up a GoFundMe page for her next round of tats. She’s offering every man and woman who comes across her campaign to pay $10 in order to have his/her name inked onto her skin. You might think that she’s crazy and you’re not the only one – Gore admits that every single sane person she knows has told her not to start this campaign.
However, Illma believes that there’s something appealing in the possibility of covering her entire body with names of people she has never heard of. Furthermore, she’s calling the campaign “unsellable artwork” and is urging people to take part in it by stating that their names will be exhibited as works of art.