One Chinese man decided to embitter the lives of 8 salespeople at an auto shop.The guy in question, whose name remains a secret, reportedly went to buy a car from an auto shop in Shijiazhuang, the largest city in the Hebei Province in China. 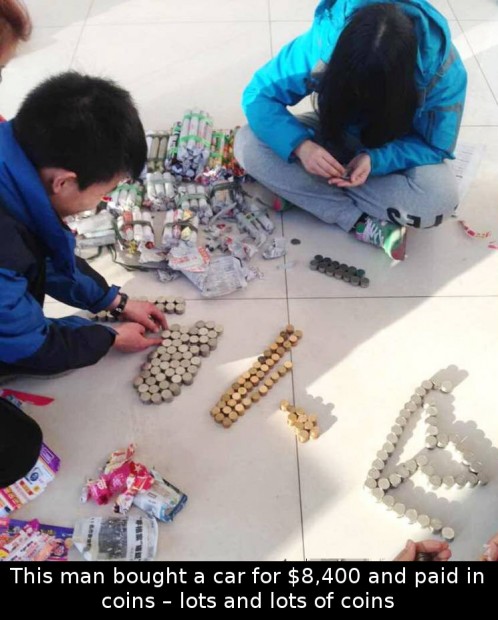 He told the salesman that he would pay in cash. The salesperson thought the man was going to bring banknotes worth 51,800 Yuan (nearly $8,444 in USD). However, the guy brought coins – lots and lots of coins. He used coins of 0.1 Yuan, 0.5 Yuan and 1 Yuan. According to the official reports, the 20,000 Yuan deposit alone weighted around 150kg. Not only that, but the shocked salesman had to engage 7 other co-workers in the process of counting all those coins. It took them a whole afternoon to go through each and every single Yuan. Fortunately, the guy hasn’t paid the whole sum for the car just yet. The auto shop’s salesman, who commented on the case, claims that the man might have to pay the rest of the money with a check – something all of the salesmen and saleswomen are hoping for.
The reports claim that the coins actually came from the buyer’s business, although it’s not quite clear what the man does for a living.