Washington Square Park is one of the most famous public spaces in New York City. Not only does it hold great historical monuments, but it’s also a place where all types of New Yorkers can be seen mixing together – from Fifth Avenue princesses to street performers to young families taking a stroll on a sunny day and even to active protestors. However, most of them probably don’t know that they’re actually walking over large cemetery grounds, which once hosted over 20,000 bodies. 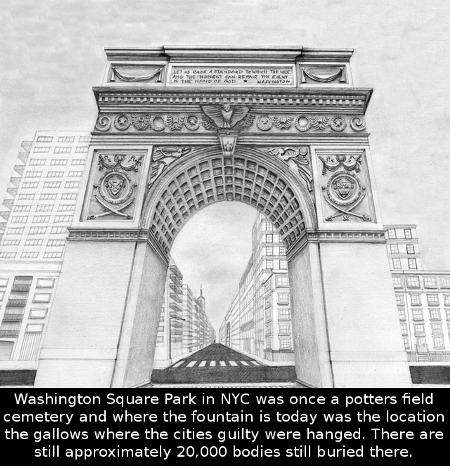 From the late 1790s onwards, the park was actually an empty field serving as a cemetery and later as public space. There were gallows which sent criminals, beggars and sick people to their deaths up until the early 1820s. The bodies of the deceased were buried on the empty fields. When the park was transformed into a drill field many bodies had to be exhumed and transferred somewhere else. However, even nowadays there are tons of remains still buried underneath the park. According to some reports, the gallows were raised close to the location on which the park’s fountain now stands.
Many people believe there are spirits still lingering on the grounds of the Washington Square Park.